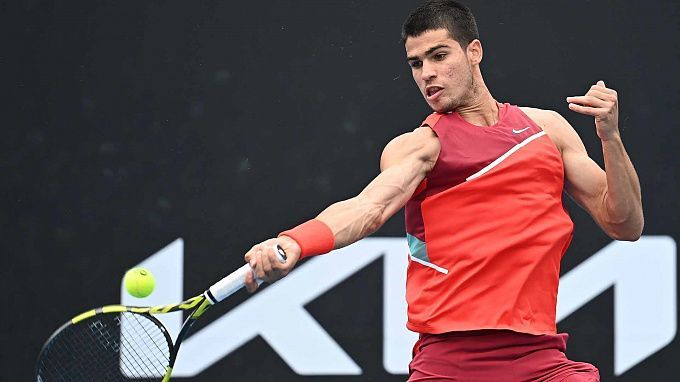 Khachanov had a wonderful match against Norrie and quite deservedly beat him in four sets. But Alcaraz also learnt a lesson after his thriller with Ramos and now he will do his best to keep his game short and stay fresh for the next rounds.

Frankly, we didn't expect such a vigor from Karen in the match against Norrie. However, he played a good match, probably the best on the clay in the couple of years. Still, Norrie played poorly, made many faults - compare his 57/59 winners/unforced errors stats against 65/43 for Khachanov. Serving was good too, 65% on his first, 52% on his second. Also, Norrie had obvious problems getting the ball into play. His second serve could not be called anything else but a kickoff - it was too weak, predictable and did not spin. So it is no wonder that Khachanov won 66% on the Briton's second serve. It is unlikely that Alcaraz will be as passive as Norrie, but we'll see.

Alcaraz's winning streak has lasted 13 matches. It began in Barcelona, continued in Madrid and Paris. He won both tournaments in Spain. At Roland Garros he knocked out Londero, Ramos and Korda. Carlos beat the first and third in three sets, but the match against Ramos was a five-set one. The guys won two tie-breaks, Ramos led 2:1, had a match-ball on his serve, but lost a game, set and match. In general, Alcaraz showed great character and willpower. Stll, his match against Korda was unexpectedly short-lived - only two hours and 9 minutes. The Spaniard did not have much in the way of aces/doubles (1/1), but his serve and receiving were excellent. Serving: 76/70, receiving: 28/56. Yeah, Korda didn't have his best match.

I only trained with him once, but I watched his games so I know it’s going to be a tough game. But at the same time he’s a tough opponent and I like those games.

Alcaraz before the match with Khachanov

Keep in mind that Alcaraz beat Nadal, Djokovic and Zverev one by one this season and Tsitsipas before. In other words, the Spaniard beat all the favorites of Roland Garros in less than a couple of weeks, and at major clay tournaments. Khachanov cannot boast such statistics, and his victory over Norrie, who played an obviously weak match, is probably Khachanov's best match of the season. Alcaraz will be more focused after his very tough win over Ramos without wasting too much energy. We believe that Carlos will win in three sets on Sunday.