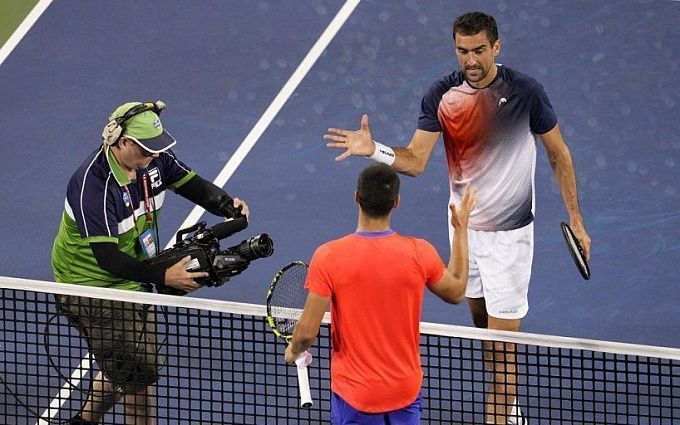 In the US Open, last 16 No. 17 Marin Cilic will meet with No. 4 Spaniard Carlos Alcaraz. They have already played three times, 2-1 in favor of Alcaraz, both winning in 2022 and on the courts of the United States.

For the Croatian, the tournament in New York is the third hard-court tournament after the grass part of the season. In Montreal and Cincinnati, the Balkan had two wins but lost in the third rounds to Paul and Alcaraz. Marin played three matches in New York, winning them all, giving only one set. Cilic knocked out Marterer, Ramos, and Evans. The Croatian used most of his strength in the match against Evans of Great Britain, which was four sets and very drawn out. The guys had two tie-breaks, noting that Cilic won the first game only 13:11. In the end, Cilic was stronger - 7-6, 6-7, 6-2, 7-5. The Croatian scored 26 aces and nine double faults, winning 82% of his first serve points and 54% of his second. Receiving stats: 27%/49%, winners/unforced errors stats: 74/44.

I played him in Estoril last year. That was around May, May time. What he has improved the most? Hmm, court coverage. Another thing is the creativity. The creativity is fantastic - maybe the best on the tour. Comparing it with Rafa, for example, Rafa's creativity is fantastic, he's adjusting to every situation fantastically. Carlos is incredible when he's on the front foot. He has so many options with the forehand, going big, line, going cross, sliding dropshots. He's got that incredible creativity. He improved, I would say, just that stability in the mindset of playing big points the way he needs to play and trusting the game. Few areas he improved incredibly, yeah.

Cilic before the match with Alcaraz

After Tsitsipas and Medvedev dropped out, Alcaraz became almost the main favorite for the Majors. Remember that Zverev and Djokovic did not come to New York, and Nadal is not yet at the peak of his form. The Spaniard confirms his high status in New York without losing a single set, knocking out Baez, Coria, and Brooksby before his match against Cilic. These were not his strongest opponents, indeed not Cilic's level. The game against Brooksby was short-lived, lasting two hours and 14 minutes. The score was 6-3, 6-3, 6-3. Alcaraz made 8/3 aces/doubles, got 75%/45% of serve points, 40%/73% on reception, and 46/34 of winners/unforced errors.

Alcaraz has already beaten Cilic twice in 2022, and twice by a score of 2-0. The Spaniard has a good level of tennis in New York, so it is risky to bet against Alcaraz. On the contrary, we consider that it is necessary to be guided by the favorite of the match and the tournament as a whole. Alcaraz will likely defeat the Croatian on Tuesday.