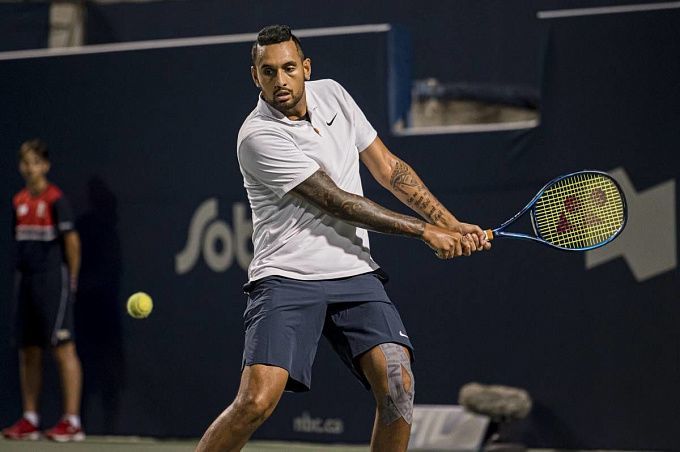 For Garin the Wimbledon quarterfinals is a real breakthrough, few expected to see this not a grass player so high on the tournament ladder before the Majors' start. Meanwhile, everyone was looking for Kyrgios in the second quarterfinal after his victory over Tsitsipas. Bookmakers are on Nick's side in the pairing and the odds on his triumph continue to fall.

Before Wimbledon Cristian played two grass matches: losing to Korda and De Minaur. However, at the English Major he has four victories, including one over De Minaur, whom Garin fell to two weeks ago. The match was a long, five-set one. Garin was trailing 0-2, but he turned the tide and won two tie-breaks. He made five aces and nine double faults, won 67% of points on the first serve and 48% on the second. a Winners/unforced stats were 56/72. It must be said that they both made a lot of errors because one and the other lacked the consistency of the game, but Garin's character was stronger.

Alex, he’s an incredible player, one of the best on grass for me. It’s so special. I’ve been working hard all my life to be in this position, and it’s a dream for me. Wimbledon, I always said that it’s my favorite tournament… It’s a dream to be in the quarterfinals, I work hard every day to be in these occasions.

Before the start of Wimbledon, Kyrgios wasnt among the favorites despite him liking to play on grass and excellent practice in three tournaments. If Garin's quarterfinal appearance is a sensation, Nick is quite expected at this stage, especially after beating Tsitsipas. Note that Nick is in the Wimbledon quarterfinals for the second time in his career, but he has not yet played in the semifinals. Kyrios knocked Nakashima out of the draw as well. The match was 5-set, but not as long as Garin vs De Minaur. Nick made 35 aces (!) and three doubles, won 78% of points on the first serve and 49% on the second, the winners/ unforced errors ratio was 79/42 - much better than Cristian's against Alex.

I almost just wake up and read things, and I just laugh. And I never forget things people say, whether it was three, four years ago, things that just stick with me. I have a massive chip on my shoulder. I sit here now in the quarter-finals of Wimbledon again, and I just know there’s so many people that are so upset.

Kyrgios is one step away from his best Wimbledon performance against not the strongest grass player. Garin sensationally defeated De Minaur in the last 16, losing 0-2 as the match. Garin should take a bow. However Alex played a poor match, he looked a bit weak, or maybe one Australian didn't want to play against another one in the quarterfinals? It's hard to compare their playing but Nick is superior. We think that he will get to the semifinals of the Majors.