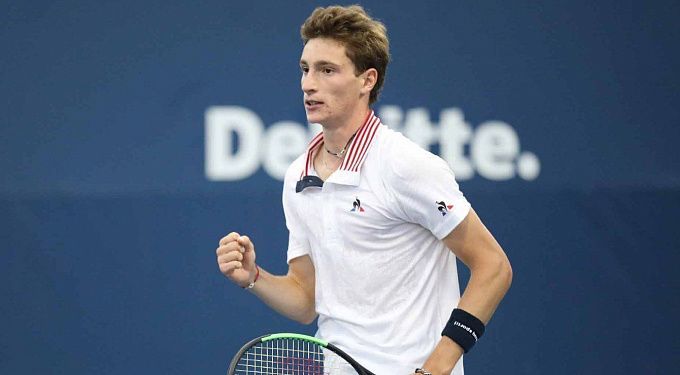 In the Wimbledon last 32 Ugo Humbert, French tennis player, No. 112, will face David Goffin of Belgium, No. 58. The bookmakers are on the side of the latter, although the advantage in head-to-head encounters is on the side of the Frenchman.

Ugo played only four matches on grass before Wimbledon. In the last one, he lost in three sets to Brazilian Monteiro in Eastbourne. In the past season Ugo won a tournament in Halle, which is a nice result for a young player. At Wimbledon Humbert gave three sets already. However he knocked out not only Etcheverry but also Ruud, a real top player. Humbert made 10 aces and six double faults. He won 72% on his first serve and 46% on his second. On the receiving end stats are 33%/54%, winners/unforced errors are 53/48.

Before Wimbledon David came only in Halle, failing the first match against Medvedev in two sets. At Wimbledon Goffin has looked flawless so far, beating Albot and Baez in three sets - just like in his best years. The match against Baez lasted only an hour and 40 minutes, 6-1, 6-2, 6-4 in favor of Goffin. He made only six aces and six doubles, which means he's not serving well. On reception he had 45%/60%, 24/26 of winners/unforced errors - not bad, but nothing special either, there were still many faults.

The bookmakers are on the side of the Belgian, but we believe that now is the time for the Frenchman. The victory over the world No. 6, Casper Ruud, even though he is not a grass player, should have given Ugo a lot of confidence. Besides, he already has experience of beating Goffin. We think the bookies are slightly overestimating David.