Brazil vs France: The Brazilians are unlikely to lose 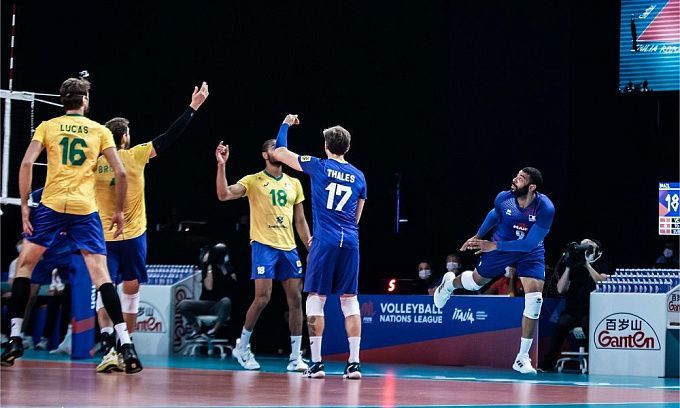 It is interesting that there is a result that suits both teams in one way or another. However, whether it will be achieved or not, France must win over Brazil by using a better defense - they are better at blocking.

The Brazilians got into the playoffs but the first place in the group does not favor them. At the same time, they may well fall as much as fourth in the event of defeat against the French. The Brazilians are good - by the time their match starts, they will already know the result of the Poland vs Canada game. I will assume that the Poles will win. In this case, the Brazilians will have to play to win in order not to meet with the Poles in the quarterfinals.
However, Brazil is doing something consistently bad. In three of their four matches, Del Zotto's wards lost on the block. They somehow defeated the Americans, but they were worse, of course than the Russians, as well as Argentina and even Tunisia.
On the other hand, in the match against the United States, the Brazilians again lost only eight innings in four games. This is a great result, and you can play on this too.

The French beat the Russian team in the previous round. As I suggested before this game, N'Gapeth and his team reduced the number of Russian blocks. If before the meeting with France, Yakovlev and his comrades set an average of 3.18 blocks per game, then they covered the French only 11 times in four sets, which is only 2.75. At the same time, the French themselves have fulfilled their norm of two kopecks per set.

It turns out that the French, already blocking better than the Brazilians, and besides knowing how not to fall into other people's cases, in theory, should defeat their opponent on blocks with a handicap even in three games. Bookmakers, meanwhile, give 1.9 to France on 0.0 blocks. I think we should take it.

As for the loss of innings, France, after the nightmarish game against Argentina, was able to pull themselves together and in the game with the Russians made 13 side-outs in four sets. Considering how carefully the Brazilians serve, it is worth looking at the total number of serving mistakes under 32.5 for 1.85.

So, I definitely take a head start on the French team blocking. They know that in case of defeat, they can skip ahead of both the United States and Argentina. Two parties of Ngapeth must definitely be taken, otherwise, the Argentinians and the Americans may accidentally roll a 3-2. By the way, with a score of 3-2 in for any team of the Brazil vs France match, both teams advance to the playoffs, excluding the settlement agreement between Argentina and the United States. Here are some betting options: