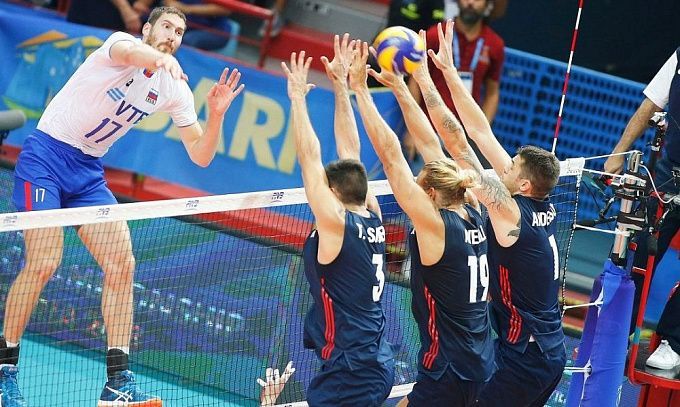 There was a huge difference in the effectiveness of passes between the USA and Russian teams in the first round of the tournament. The Russian team must continue to play calmly in order to achieve victory over the USA team.

The USA team beat France in the first round in three games. They were predictably stronger than their opponents in the attack and on the defense but it took a lot of effort to make the French team feel overwhelmed. Anderson and Sander are in great shape, which will be very useful in the upcoming match.

After such a performance the bookmakers consider the U.S. team to be the favorite of the upcoming game. Of course, some may argue with this, but with such a strong defense and reception performance, the USA team is unlikely to lose without scoring.

The Russian team beat Argentina in four sets. At the same time, the team scored fewer points on offense than their opponent. First of all, this can be attributed to the poor receiving performance of the team.  Alas, the balance of power in the game with team USA will remain the same - both Erik Shoji and Micah Christenson are stronger in their positions than Golubev and Kobzar. The Russian players don't have an advantage over their American counterparts in receiving, that is why bookmakers suggest that the USA team is the favorite of the encounter.

So, both teams' players are just as good in their offense, but Mikhailov and his teammates are worse on their reception and second passes. Fortunately, a match is not won by blocking only, so a strong attack should be sufficient to win. Conclusion: the Russian team will have a hard time but It is strong enough to beat their American counterparts. I suggest the following bets: