Joseph Waring
FM Monteverde
February 19, 2014
telecomasia.net
share Print Email
Telcos in Asia Pacific have fewer concerns over spectrum and radio access capacity than a year ago, with just 50% seeing mobile network capacity a constraint on services now or in next 12 months - down from 68% in 2013. A quarter of telcos also think consumers will no longer pay for voice and text services within two years.
According to a Telecom Asia-Ovum online survey, 62% of those surveyed said they have sufficient spectrum to meet their traffic needs in the short to medium term - a sharp jump from 48% a year ago when 52% foresaw a shortage.
“Given recent spectrum issuances and license renewals, this year short- to medium-term spectrum capacity concerns have been alleviated," Ovum senior analyst Nicole McCormick said.
“We expected that telcos would be more satisfied with spectrum holdings and they were in markets surveyed including Hong Kong, Australia, Taiwan and the Philippines - but in Malaysia, spectrum shortage remained an issue for some in the survey."
Similarly, the number indicating that radio access network capacity is currently a restraint dropped from 35% to 26%. Those believing it will be in the next 12 months also fell by a similar percentage - from 33% to 24%. About the same percentage as a year ago (21%) don't see network capacity as a restraint on mobile services. But more than double the number say they don't know (28%).
Network quality was a key differentiator for 35% of mobile broadband service providers, compared with 29% in 2013. 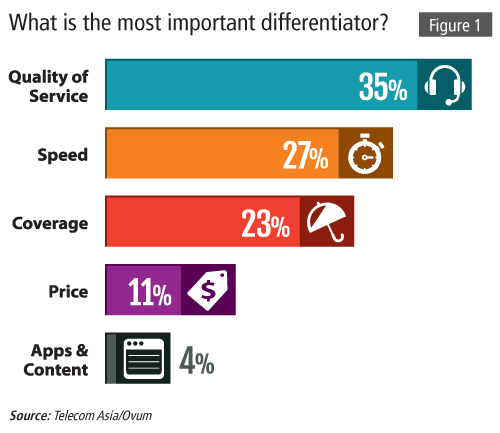 Network coverage also increased in importance (from 16% a year ago to 23%). Speed as a differentiator held onto its second ranking with a flat 26% as price took a heavy hit, dropping to fourth with just 11% seeing it as a differentiator (down from 19% in 2013).
"For the second year, network quality topped the survey as the main source of differentiation for mobile broadband, as data usage continues to surge to meet customer demand. People are using more mobile data for more things and they expect unrivalled network performance," said McCormick.