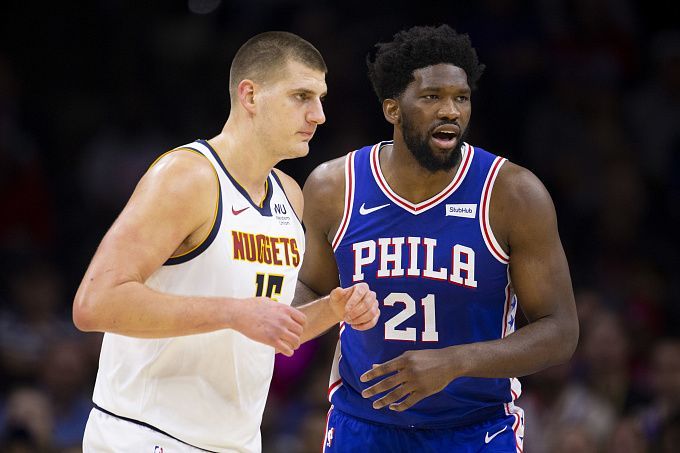 Nikola Jokic and Joel Embiid are the NBA's best center players at the moment and contenders for the league's Most Valuable Player award. Their head-to-head matchup will be a highlight of game day. Who will win - Denver or Philadelphia?

The Sixers have won 7 of their last 9 games, and they are currently 2nd in the Eastern Conference. James Harden has debuted well, but he's also had a few disappointing games. Joel Embiid is averaging 29.7 points per season and is 3rd in scoring, behind only Giannis Antetokounmpo and LeBron James. Tyrese Maxey is playing at an all-star level, and among the role players, Georges Niang, who scored 10+ points in 4 of 5 contests, is worth mentioning. The good news is that almost all the Sixers players are healthy, although even losing Danny Greene could be very serious with the current depth of the roster. Green won't be on the floor against the Nuggets for sure.

The recent match against one of the East's outsiders, Orlando, was a difficult one. The game went into overtime, in which Philadelphia came out on top with a 116-111 score. Only six Sixers players scored points in that game, with Harden, Harris, and Embiid combined for 87 points. The Cameroonian center made only 9 of 28 shots from the field but was the most productive player on the floor with 35 points.

The Nuggets are sitting in sixth place in the Western Conference, although they have lost their last two games on a consistent basis. On their home court, they lost alternately to Golden State (102-131) and Toronto (115-127). Colorado had previously won 10 of its 11 games, losing only to Oklahoma. Aaron Gordon missed the meeting with the Raptors, and that couldn't help but affect Denver's defense. Gordon's participation is now questionable, Zeke Nnaji may not play, and Michael Porter Jr., Jamal Murray and Vlatko Cancar will not join. Will Barton only returned to action the day before, so the Nuggets' success is especially valuable amid ongoing roster issues.

Philadelphia sacrificed roster depth when they acquired James Harden, and the team needs to work on their roster. The Sixers have to experiment with their center backs, and the signing of DeAndre Jordan didn't happen out of the goodness of his heart. The fact that only six players scored against Orlando, and Isaiah Joe among them, speaks volumes. Denver has slowed down lately, and a lot will depend on Gordon's participation now. The Nuggets can hit a lot from beyond the arc, and a three-point field-goal percentage will be a key factor. I think the visiting team will play their best basketball and take revenge for their home loss.