San Antonio Spurs vs Chicago Bulls: it's Not Going to be Easy for the Bulls in Texas 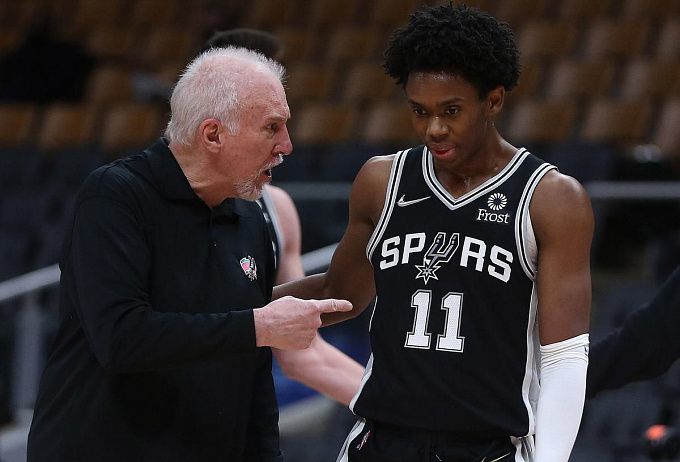 San Antonio is fighting for a playoff spot in the West. Gregg Popovich's team will play their next game at home against one of the best teams in the Eastern Conference, Chicago. Will the Spurs manage to win? We will choose several options for betting at once.

So far, the Spurs are not among the teams that will even make the playoffs at the end of the regular season. Gregg Popovich's team ranks 12th in the Western Conference standings with an 18-31 balance. They are two wins away from the top 10. San Antonio is having a tough time, but it's still too early to write them off. After all, this is Gregg Popovich's team, which speaks for itself. In their last game, the Spurs lost to Memphis, 110-111. The Spurs, though they lost, kept one of the leaders in suspense until the end.

The Bulls are having a great season. Billy Donovan's team occupies second place in the Eastern Conference standings with a 30-17 balance going into their matchup with San Antonio. It's a good position, but the density in the conference is so high right now that even the Bulls are only three wins away from seventh place. The middle of the season is not a stretch that guarantees anything, including Chicago. The Bulls handled Toronto 111-105 at home in their last game. DeMar DeRozan was the most productive player with 29 points. Zach LaVine finished the game with 23 points.

Without the injured Lonzo Ball, the Bulls' offensive potential is significantly diminishedю. While Vucevic and Lavin are in good health and DeRozan returning to San Antonio, where he spent more than one season, the Bulls will face some problems in the upcoming game. Gregg Popovich's Spurs have proven time and again this season that they can win games where their opponent is superior. Take, for example, an away win over Golden State Warriors and an overtime loss to Brooklyn. Prediction is that San Antonio will put up one of the leaders in the East with fierce opposition.