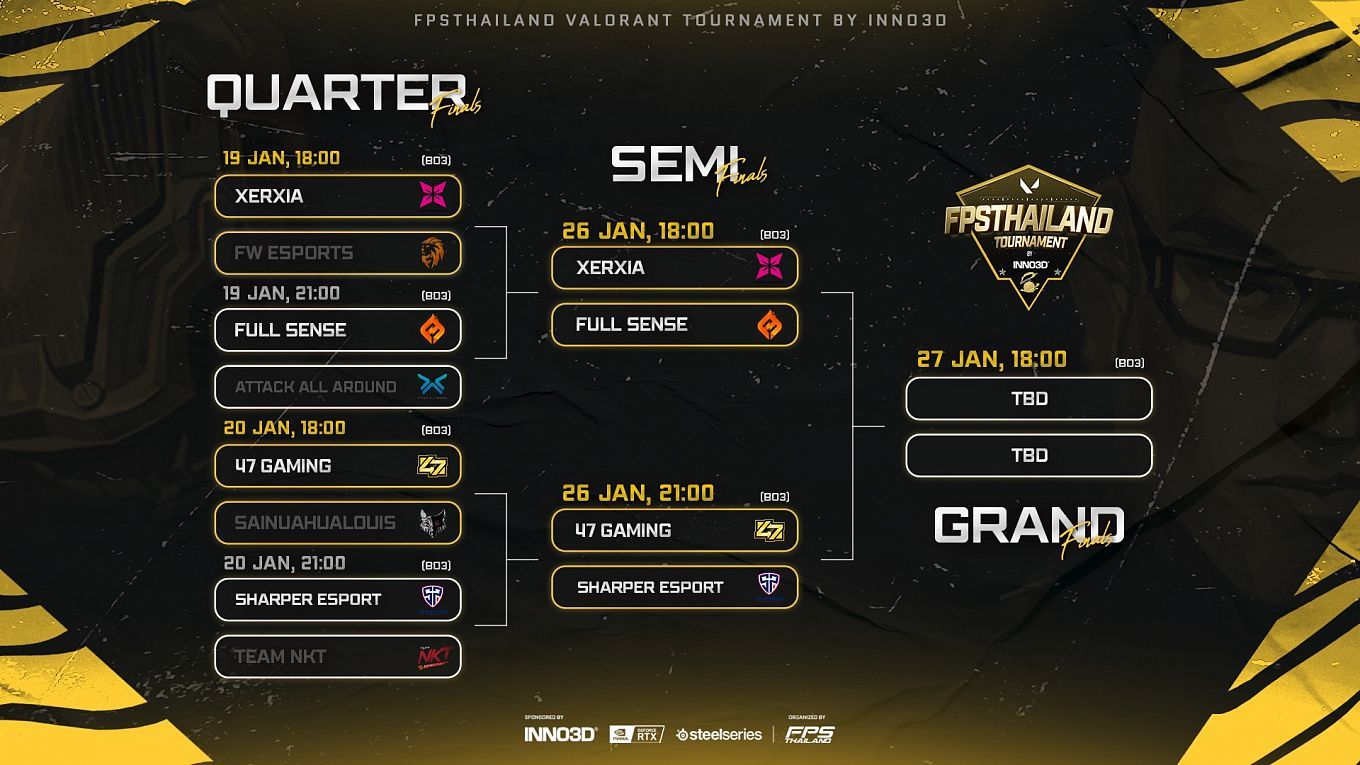 The first semifinal match of the FPSThailand Tournament will be on Wednesday, January 26. In this clash for the final, XERXIA Esports and FULL SENSE will clash.

FPSThailand Tournament is where top Thai teams battle it out for $1,400. This tournament takes place from January 19 to 27, 2022.

We have seen almost all the players from XERXIA Esports. Except for Surf, all of them were in the X10 CRIT organisation. They were doing well in their region and on the world stage by reaching the Valorant Champions play-offs. However, following their departure from the tournament, news broke that Patiphan, the team's main firepower, left the Valorant discipline and returned to Overwatch. It was then revealed that the remaining players in the star-studded roster would not be continuing to play for X10 CRIT either. In mid-January, it was announced that XERXIA Esports would be taking all former X10 CRIT players under their wings and adding Surf to them.

The new squad has only played one game so far, but it's already told us a lot. Surf has taken over the Patiphan role, so the rest four haven't changed their roles. As for the duelist role itself, Surf has performed very well without dropping down statistically. Looking at the match as a whole, XERXIA didn't have the strongest opponent, but they managed to grind the nerves and take the second map in extra rounds. They could not put up much of a fight on the first and third.

The match against FULL SENSE will not be easy, but most of the squad has a lot of experience playing against these players. Watching Surf's play, he will not let the team down, but if XERXIA themselves relax and start giving away their game, it could end up with two maps.

FULL SENSE: They are charged to become Thailand's top 1

After a disappointing defeat at the VALORANT Champions, the boys from FULL SENSE started the new season with a very good result. The group stage of VCT Thailand, where FULL SENSE has already been invited, starts on February 10. The guys are already in the bootcamp playing big tournaments in parallel, and all of them are making it to the podium. Only XERXIA Esports can cause problems at this tournament, but if you look at FULL SENSE's form right now, you can see the insane progress.

At the tournament, they are playing in parallel, even though they fell to the lower bracket at the start, but after that, they leave no chance for their opponents, beating everyone 2-0 on the maps. In FPSThailand itself, in the first match, against Attack All Around, the resistance was only on the first map. Then complete domination on the map.

Against XERXIA Esports, there were a bunch of matches that always had a different outcome. Now they have bootcamp and fiery form, and they have replacement and adaptation to everything new. If FULL SENSE shows such Valorant, we could be 2-0 up.

These teams have met each other seven times. XERXIA Esports won the first five matches with the score on the maps 12:2. The sixth meeting was 1-1, but the seventh meeting was the first victory for FULL SENSE, with a 2-1.

In this match, I will take the victory of FULL SENSE for 1.70.