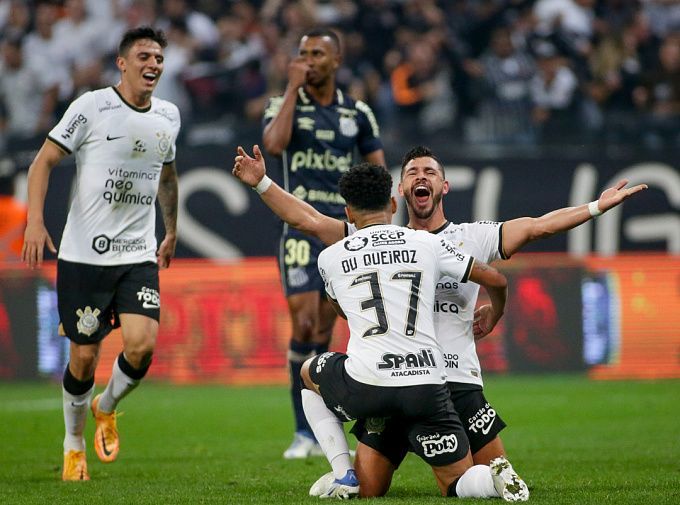 One of the central matches of the 14th round of the Brazilian football championship will be between Corinthians and Santos. Check the team conditions and choose several betting options.

Since losing to Cuiaba on 8 June 2022, Corinthians has played four games in two tournaments, winning three and drawing one. By the way, the opponents played each other only three days ago in the Brazilian Cup, and Corinthians won that meeting at 4:0. Logically, Timao is widely regarded as the favorite to win the game. It should be noted that before the start of the 14th round of Brasileirao, Corinthians is second in the championship standings, three points behind league leader Palmeiras. Corinthians' home statistics are also second in the peloton, +4=2-0, 9:2 goal difference.

Santos lost 0:4 to Corinthians, but the Fish had been unbeaten in five consecutive games before that. During that period, Santos was stronger away than Juventude and drew with Bragantino, Atletico Mineiro, Inter and Atlético Paranaense. Santos is eighth in the Brasileirao standings, behind top-6 Fluminense on goal difference. The goal for Santos this season in Brasileirao, is a position in the Libertadores Cup zone. Santos' away statistics are 12th in the division, +1=3-2, 6:7 goal difference in six games.

The recent match showed that there is even some difference in class between Corinthians and Santos. Otherwise, how else can one explain the easy victory of Timao over the Fish. Corinthians scored three unanswered goals in the first half, so the win for Corinthians was more than deserved. However, it is unlikely that we will see the same kind of defeat on Sunday. Instead, we expect more persistence from Santos, which will not help the Fish in scoring anyway. As for the total, we expect two goals.