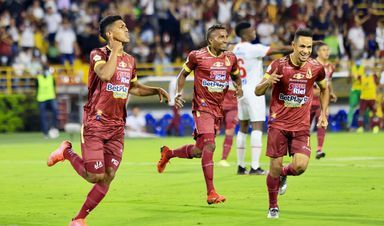 In the upcoming Matchday 13 of 20 of the Colombia Categoria A, we have America de Cali taking on Deportes Tolima at the Estadio Pascual Guerrero in Cali. Going in the game, Deportes Tolima will look to start fresh and start winning. According to the table standings of today, the hosts, America de Cali, stands 3rd with 5 wins and 20 points from 12 games played. Deportes Tolima, on the other hand, stands 15th with just 2 wins and 12 points in the contest so far. When the last time these two sides played against each other, Tolima won 1-0.

America de Cali - Coming off a Win Against Patriotas (WLLWW)

From the last five games played, America de Cali has won three matches and is looking to take the momentum from its most recent win against Patriotas (2-0). In the previous game, America de Cali played with a 4-4-2 formation, and Kevin Andrade and Juan Perez were successful in finding the net. With a goal-scoring average of 1 goal per game, America de Cali will look to adapt to its normal approach and win the game at home. For Cali, much will depend on Deiner Quinonez, who has created the most goal-scoring chances for his side.

Deportes Tolima - Coming off a Win Against Once Caldas (WDDLD)

Going in the contest, Deportes Tolima has improved its overall game form as it is coming off a win against Once Caldas (1-0). Before that, Deportes Tolima managed to draw back-to-back games against Patriotas (1-1) and Cortulua (0-0). With a goal-scoring average of 1.3 goals per game, Deportes Tolima can upset the home side. Tolima has won its previous three encounters against Cali, making them the favorite to win again. Tolima will back Andres Renteria and Steven Lucumi to steer the side towards the winning part.

Going in the game, Deportes Tolima will be the favorite to win as they have a prolific record against Cali. The game total is expected to be under 2.5, and we can also predict a draw, with both teams managing to score a goal each.