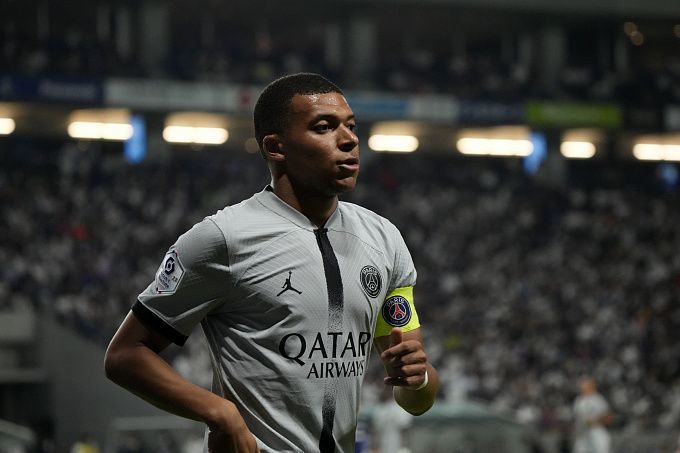 Kylian Mbappe has been the top scorer in the French Ligue 1 for the last four seasons. Will the rivals interfere in the fight for the Golden Shoe? Our prediction: the PSG forward will once again be the top scorer!

All French Ligue 1 strikers have been waiting for when Kylian Mbappe would leave for Real Madrid to intervene in the tournament's top scorer battle finally. Unfortunately for the competition, nothing of the sort happened, and the leading French talent extended his contract with PSG for another three years. Will 23-year-old win the scoring race for the fifth year? TelecomAsia talks about his chances of success and the players who could stop him!

Kylian Mbappe is, of course, the top scorer in the 2022/23 season in Ligue 1. The loudest indication is that he has won the title for four years. Even though in the 2019/20 season, he shared the lead with Wissam Ben Yedder when both players scored 18 goals each, but otherwise the young Frenchman's victory was unanimous. At the end of last season, the 23-year-old forward scored 28 goals, getting ahead of his nearest pursuer by three goals. The new contract makes Mbappe an icon of the Parisian club, around which the whole game will be tied even more than before.

The second favorite of the upcoming season is Alexandre Lacazette, who returns to the French championship in his native Lyon. Before his 5-year assignment to the EPL, the Frenchman spent three consecutive glorious seasons in Lyon, scoring a total of 76 goals in 97 games (0.78 per game). The debut of his career at Arsenal was great. He scored regularly, but gradually he began to lose his place in the starting lineup, so that the results went down. In the last championship he sent only four goals and decided to return to Lyon, where he will have a chance to reach the same level.

Wissam Ben Yedder has been Kylian Mbappe's main rival in recent years, and in the 2019/20 season he even shared the title with the PSG forward. Since his transfer to Sevilla, the Frenchman has spent three years with Monaco, playing exactly 100 games in Ligue 1 with 63 goals (0.63 average per game), a perfect figure. Last season, the 31-year old set a personal best for his career with 25 goals, just three goals less than the winner of the all-time leading scorer list. Wissam is still at a good footballing age, so he is ready to continue scoring frequently.

It is unlikely that anyone would argue that Neymar is an incredibly technically equipped footballer who can play at the highest level, but he does not always show all his best qualities. Since moving to PSG, he has never played more than 22 games in the league for various reasons: injuries, his sister's birthday, problems with his form. However, he annually passes the mark of ten goals scored, and in the case of a full season he can shoot more than two dozen goals. It remains to be seen when this will happen, and whether it will happen at all, given the desire of the Parisian management to part with him.

Moussa Dembele appears to have finally settled down with the moves and decided to focus on playing for Lyon. Yes, he had good seasons with Fulham in the APL and Celtic in the Scottish Championship, but a short stint playing for Atletico in the Primera made the Frenchman get rid of his experiments. The move benefited his career as he played 30 games in Ligue 1 last season, scoring 21 goals - a personal best - being fourth overall in the goalscoring race. If the 26-year-old striker adds more, he could fight for the top 1 in the French league.

Before the start of last season, Lionel Messi was seen as the leading contender to win the Ligue 1 scoring race. That championship was the Argentine's debut for PSG, so we expected some difficulties with adaptation, but he had a whole weak year at club level. Six goals in the national championship is a failure, although he made 14 assists. He will probably perform better in the second year, but in late autumn he will have one last chance to win gold medals at the World Cup in Qatar, so the world soccer legend's thoughts will obviously not be about goals.

Arkadiusz Milik continues to make the list of top scorer contenders every year, but he hasn't been in contention for the top spot in a long time. In fact, by the age of 28, he has only had two standout seasons: in 15/16 for Ajax with 21 goals and in 2018/19 for Napoli with 17. The rest of the time he was constantly haunted by injuries so he both missed a lot of games and scored significantly less. Last season he only played 23 matches for Marseille, scoring seven goals. For sure, if injuries will bypass the Pole in the upcoming season, he will make a decent statistic, but we do not believe it.

Rennes is famous for selling young and talented players to seasoned and wealthy clubs. There is a good chance that Martin Terrier, who had a great season in Ligue 1 last season, will change clubs soon. He scored 21 goals in 37 games, making him one of the top 5 goalscorers in the tournament, although he had never even reached the ten-goal mark before. The forward is 25 years old, so the best time to sell is hardly to be found. Nevertheless, the Frenchman continues to play for the Red and Blacks, standing out in the preseason games.

Dimitri Payet is one of the brightest players in Ligue 1. It seemed that his finest hour was during Euro 2016, when he was a key player for the French national team, reaching the final of the home tournament. After that his performance declined slightly, but for the sake of Marseille he even took a pay cut to continue playing for his beloved club. And at 35, the attacking midfielder suddenly had one of the best seasons of his career: 12 goals, 10 assists and a vice-champion title in Ligue 1. Yes, the Provençal leader is not getting younger every year, but he is still able to be productive in offense.

Last season, Rennes became the second highest scoring team in the French league after PSG, so the Red and Blacks' strikers have been the owners of some impressive personal statistics. Gaëtan Laborde had 38 matches in Ligue 1, scoring 15 times, and he sent more only with Montpellier the year before - 16 goals. Two consecutive seasons when the Frenchman was among the top six scorers in the tournament is an excellent indicator, confirming the solid level of skill of the forward. There is no reason to believe he will suddenly regress in the 2022/23 season.

For four years in a row the French championship has been devoid of scoring intrigue, as each time Kylian Mbappe took the award. In the summer, the player signed a new contract with PSG, so the chances of competitors to compete for the Golden Shoe in the local championship have sharply become minimal. There is a high probability that Neymar and Lionel Messi would not mind giving decent resistance to their teammate, but the Brazilian plays too rarely and the Argentine will be thinking about the 2022 World Cup.

In the last couple of years, the French Ligue 1 has produced good scorers like Gaëtan Laborde and Martin Terrier, but it's naive to compare them with the PSG prodigy. If the 23-year-old avoids serious injuries, he should once again win first place in the scorers' race, and by a considerable margin, so we bet on Kylian Mbappe's victory.