Bochum vs Borussia M: the Hosts to Earn Points in the Under Match 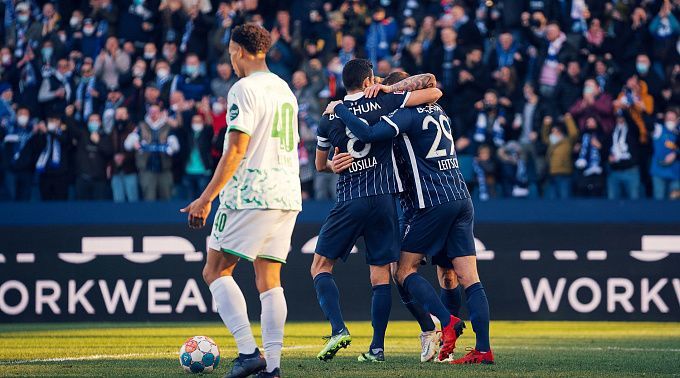 Bochum will host Borussia Gladbach in the Bundesliga 27th round. Despite the weak away statistics and the fact that Borussia is below their future opponent in the standings, bookmakers still consider the Colts as favorites.

After 26 rounds in the Bundesliga, Bochum occupies the 11th position. Few predicted the team's success. On the contrary, most believed that Bochum would perform as a yo-yo club this season, returning to the Bundesliga 2. Now Bochum has almost no prerequisites for relegation, being 9 points behind Stuttgart. However, no one can guarantee Bochum keeps their place in the elite. In other words, it is still too early for players to relax, especially at home, where the team takes the lion's share of points. We should note that Bochum scored 24 points in 13 games on its arena, gaining seven wins.

Adi Hütter disappoints with his job at Mönchengladbach. Instead of competing for Eurocups and the UCL, the Colts are stuck at the standings' bottom, keeping the risks of relegation. In 2022, Borussia won only over Augsburg and Hertha, both at home. They lost away to Dortmund, Stuttgart, and Hannover in the DFB-Pokal. Still, Borussia is the favorite in the upcoming game in Bochum. In terms of stats, in 13 away matches, Borussia has got one victory and eight failures, with a goal difference of 13:30.

Bochum rarely plays a productive match. In 2022, we saw Bochum's sensational 4:2 victory over Bayern. We do not expect goals in the upcoming game either. No matter how you look at it, Bochum is no Dortmund. The disappointing second half against Stuttgart should have taught the Colts some ropes. As for the outcome, we are on the home side. We think that the bookies overestimate Borussia and underestimate Bochum once again.