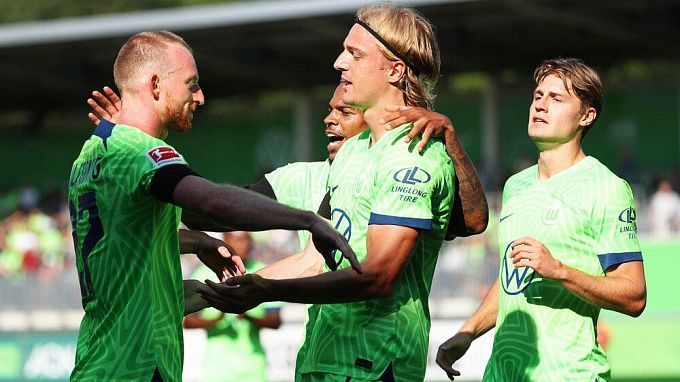 In the first round of the Bundesliga 2022/23, two green teams will meet Wolfsburg and Werder. The bookmakers are on the side of the senior Wolfsburg. Don't forget that Werder is a newcomer to the elite, while the Wolves are somewhat the old-timer of the Bundesliga. However, the visitors, undoubtedly, have very high motivation. So they won't just present points to the opponents.

Before the season's start, Wolfsburg played five test matches: a defeat from Osnabrück, a draw with Hannover, victories over Tirol, Mechelen and Brentford. Wolfsburg made it to the second round of the German Cup, knocking out club Carl Zeiss Jena. However, one cannot say that the victory was easy one. The only and decisive goal was scored by Marmoush assisted by Brekalo in the second added minute. The game was going into extra time but Wolfsburg managed to finish right in time. By the way, the club renewed the squad, they invited Svanberg, Kaminski, Wimmer, Franjic, Fischer. Gone: Schlager, Mbabu, Brooks, Rexhbecaj, William. Recall that since the new season the team is managed by Niko Kovac, once coach of Eintracht and Bayern.

Werder Bremen is not a typical climber. Bremen is a top division club, it should not have been relegated, but then had a strong season in the second division. Werder coach Ole Werner is doing very well. I see him as a colleague who thinks outside the box. I expect a high Bundesliga level from Bremen and a tense game, which will be explosive, because it is also a match between two clubs from the north.

Before the start of the season Werder played four test matches losing to Oldenburg and Besiktas, drawing with Twente and winning over Karlsruhe. In the first round of the German Cup the club's opponent was Energie Cottbus. Werder won the game quite logically and deservedly, performing better in terms of ball possession and the number of shots. Werder is 17th most expensive squad, and the club's managers retained the head coach spot for 34-year-old Ole Werner, who led Werder to the elite. Prior to Bremen, he worked for a long time in Holstein. Besides, Stark, Pieper, Bürke, Stage, Buchanan joined the squad, while Nawrocki, Toprak, Plogmann left.

The Wolves looked better than Werder in the preseason, and we will build on that when choosing the bets. The statistics of personal meetings between the Wolves and Bremen on the side of Wolfsburg. We believe that Niko Kovac's team has a good opportunity to start the season in the Bundesliga with a victory, bringing the winning streak to five matches. As for the total, 3 of the last 4 matches between the green teams ended with the TO (2.5).