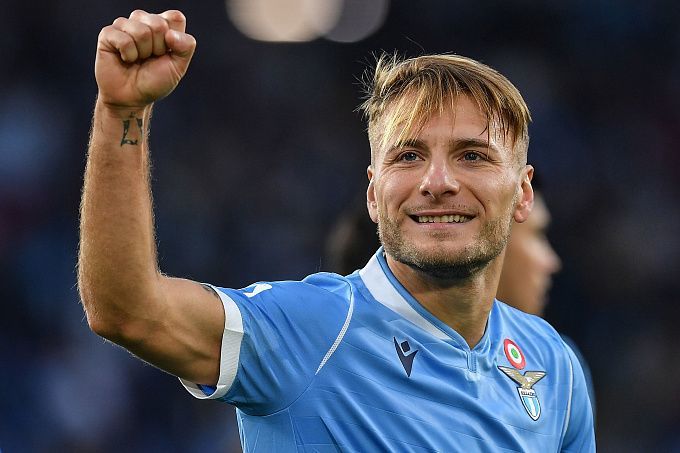 Ciro Immobile won the Serie A European Golden Shoe for the fourth time in his career following the 2021/22 season. Will the Lazio forward claim this award again? Our prediction: Ciro will outplay all competitors this time as well!

The Italian championship in recent years has been very productive, becoming one of the most goal-scoring tournaments among Europe's top leagues because of the high-quality forwards. The reigning Serie A Golden Shoe winner is Ciro Immobile, who netted 27 goals last season, four ahead of his nearest pursuer. Will the Lazio striker remains at the top of the table after the 2022/23 season? Will his rivals interfere in the scoring race? TelecomAsia looks at the leading contenders for the Serie A most productive player title.

Lukaku's career in recent years has been full of ups and downs. Just a few years ago, the Belgian got disappointed in the EPL. Then, he rushed to Serie A, spent two great seasons for Inter, scored 47 goals in 72 games (0.65 average), became the champion of Italy, and then suddenly decided to return to England, so also to Thomas Tuchel's Chelsea. The club paid a lot of money for him, but he did not bring any benefit to the Londoners, shooting only eight goals in 26 games while dreaming of a return to Inter. Now his wish has come true, and he moved to the Milan club on a one-year loan.

Dusan Vlahovic is young but he's rapidly progressing becoming a top forward in the last couple of years. First, he scored 21 goals in 37 games for Fiorentina in the season 2020/21. Then, he spent the first half of the new championship even brighter - 17 goals in 21 games for the Violets so he joined Juventus. The debut at the Turin club was extremely productive for the Serbian, he immediately began scoring in the Italian league and the Champions League, but at the end of the season he slowed down a little. Moreover, Massimiliano Allegri is in no hurry to field the 22-year-old in the summer pre-season, focusing on Moises Kean.

Ciro Immobile toured all over Europe at the start of his professional career, playing for Serie A, Spanish Primera and the German Bundesliga. Then, he ended up at Lazio, where he spends his best years as captain and leader. He is already four times the top scorer in the championship at the end of the season. To repeat the Swede's Gunnar Nordahl, who won the Golden Shoe five times, he has to get one more award to win. Moreover, it is Ciro who holds the Serie A record for goals in a single championship: he scored 36 goals in the 2019/20 season.

Lautaro Martinez continues to grow every year, transforming from a young and promising player into a true Serie A star. This coming year will be the fifth year for the Argentine at Inter, with his scoring output getting higher and higher with each championship, from six goals in the 2018/19 season, to 21 goals and third place in the scoring race at the end of the last season. Now Romelu Lukaku is back in the Black and Blue's squad, capable not only of scoring a lot, but also of assisting, so the Belgian is more of an assistant than a competitor for Lautaro.

For Duvan Zapata, the coming year will also be the fifth in the Atalanta squad, but the dynamics of his sniper accomplishments are reversed. If in the debut season for Bergamasca he scored 23 goals, then with each new championship, his numbers decreased. Last year he sent only ten goals. It is important to note that the Colombian has been recovering from injury for a long time, so he spent only 24 matches in Serie A. In the 2022/23 season, much will depend on the kind of soccer Gian Piero Gasperini's charges will play as they can score a hundred goals, then Duvan's results will be high.

Victor Osimhen is still a very young forward who continues to develop. The upcoming championship will be his third with Napoli. In the previous two he played only 51 games out of 76, as he is constantly haunted by injuries. Nevertheless, both times he crossed the mark of ten goals, so now we have the right to expect a decent performance from him. Fortunately Luciano Spalletti continues to trust the Nigerian player, and there is not so much competition for the position of a central striker in Naples. The main thing is to avoid injuries.

Tammy Abraham is another ex-Chelsea player who moved to the Italian league and did not regret it. In the EPL, it was too difficult for the tall player to demonstrate high performance, but in Serie A, in his debut year, he made it to the top-5 scorers of the tournament. The main problem of the Englishman is extremely low efficiency, as his goal-scoring chances during the season were many times more than those 17 he converted into goals. The 24-year-old will spend his second year with Roma, so the demands will be much higher, but he still needs to cope.

Olivier Giroud is an experienced footballer who had his most productive season of his career ten years ago, playing for Montpellier in the French Ligue 1, 21 goals. After that there were years in London, but for Arsenal and Chelsea he scored much less, and in the last four seasons in England, he never shot more than ten times a season. After that the 35-year-old Frenchman decided to move to the Italian Serie A, where he immediately recorded on his account 11 goals and became champion. Moreover, in the summer the striker is scoring tons of goals and in preseason games, which confirms his excellent form before the start of the new championship.

Paulo Dibala has been inextricably linked with Juventus in recent years, playing seven consecutive seasons for the Turin club. Not every championship was a success for the Argentine, but he scored 19 and 22 goals in Serie A and was a true leader of the Black and Whites, and at times he was even captain of the side. Surprisingly, in the offseason the player and the club never agreed on a contract extension, so the 28-year-old striker went to Roma for Jose Mourinho to make a new step in his career. In Rome, the new recruit was incredibly warmly welcomed by numerous fans, so now Paulo must live up to the hopes.

A few years ago, Marko Arnautovic was forgotten by many when he left for the big money in China, but since then he has returned to Europe to spend the best season of his career. He had never scored more than 11 goals in a championship before, but for the modest Bologna side he made 14 goals in his debut year. Such a formidable performance allowed the Austrian to become the top scorer and enter the top 10 of the most productive players in Serie A. Moreover, there was a period during the championship when the 33-year-old striker was the only one to score for the Red and Blues, so he will get special attention now.

There will again be a fierce battle for the Golden Shoe in the new Italian championship, and Ciro Immobile is the main contender for the award. The Lazio captain turned 32 in February, so he has not so many years left to play at such a high level, but Ciro has an intention. He is currently the top scorer four times in Serie A, and he must win the race again before he can repeat the record of the tournament.

Of course, there is plenty of competitors for the Italian, but most other Serie A clubs do not rely as heavily on their central striker as Lazio. The Romans' entire offensive game is built around their captain, who annually scores on an impressive scale. That's why it's worth looking at a bet on Ciro Immobile's victory.