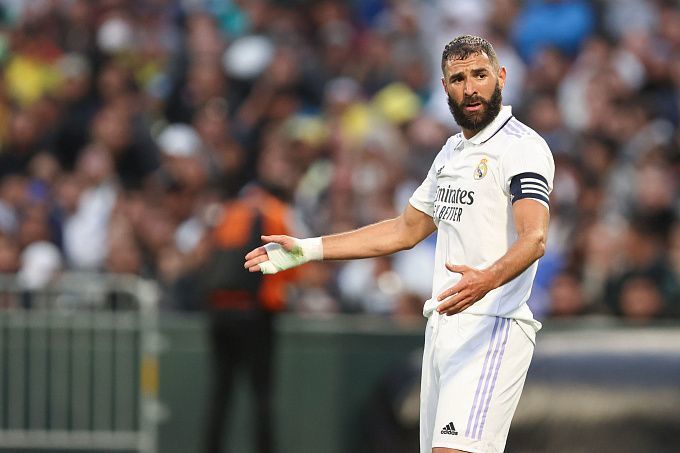 Karim Benzema became Spain's top scorer for the first time in his career during the 2021/22 season. Will the Frenchman defend his title at the end of the new championship? Our prediction: the Real Madrid forward will outplay his rivals!

Before the start of last season, Karim Benzema finally waited for the moment when there would be no Cristiano Ronaldo or Lionel Messi in La Liga to win the scoring race of the Spanish championship for the first time in his career. TelecomAsia presents the Frenchman's prospects in the fight for the next Pichichi Trophy and his main rivals for this award!

Karim Benzema for too long has been in the shadow of Cristiano Ronaldo and Lionel Messi. In his shoes many other athletes would have broken a long time ago, but the Frenchman had stamina and in his fourth decade managed to improve his skills significantly. In his 34 years he had the best season of his career: in the Spanish La Liga he made 27 goals and 12 assists, and in the Champions League 12 games he scored 15 goals. By the way, he won both tournaments, and before that he also claimed the Super Cup. Obviously, following the first Pichichi Trophy, he will also win the Ballon d'Or for the first time, but it is even more important for him to stay motivated.

Robert Lewandowski is one of the best players in the history of German championship. The Pole could go on to set all sorts of records there, but in the off-season he suddenly made the decision to leave Bayern for Barcelona. Nevertheless, during his eight seasons in Munich club he participated in 252 games scoring 237 goals (0.94 on average per game). Crazy figure! He won the Golden Shoe seven times - a record for the tournament. In the 2020/21 season he also shot 41 goals, the highest number of goals ever scored in the German league. We doubt it will happen in the foreseeable future again.

A player who is always looking for some kind of scandal when he gets bored with the team. That happened at Borussia Dortmund and at Arsenal, when he got tired in London and lost the trust of Mikel Arteta. Once at Barcelona, the Gabon player performed at his usual level, scoring 11 goals in 17 games - more than he had scored in his previous season with the Gunners. Now the 33-year-old African will be back with Robert Lewandowski, with whom they worked well together a few years ago in Dortmund, so we can expect more progress from Pierre-Emerick!

Immediately after Lionel Messi left Barcelona for PSG, it seemed that the Bluegrana's offense lacks someone capable of scoring on a regular basis. Memphis Depay, who had previously scored 20 goals for Lyon in Ligue 1, was called upon to solve this problem. He got off to a lively and productive start in Catalonia, but then his stats declined as the Dutchman began to suffer injuries and, with the arrival of Xavi, other strikers joined the squad. As a result, the second half of the championship was unsuccessful for the 28-year-old, but he still scored 12 goals in 28 games - not a bad figure, but now the competition in the Barça offense is more intense.

A young Barcelona talent who has been expected to make a colossal breakthrough for more than a year. He broke into the Primera boldly and brightly, scoring seven goals in 24 games in his debut season, although he was 16-17 years old at the time. Unfortunately, after that injuries plagued him constantly, so in the next two championships he played only 17 games, but still shot eight goals (0,47 average per game). In the coming season the Spaniard will be 20 years old, he should grow stronger and become a full-fledged player of the team.

Iago Aspas is a forward who began his career at Celta, got out of the Segunda with them, but then decided to look for luck in the EPL. A year-long trip to Liverpool was unsuccessful. He visited Sevilla without success, too, and returned to Vigo, where he plays to this day, demonstrating excellent performance. He scored at least fifteen goals each year out of seven, and last season the Spaniard shot 18 goals, becoming the second top scorer in the Primera. Alas, so far, Iago has never won the scoring race, but he is too unlucky on the competition: Messi, Ronaldo and even Benzema.

Antoine Griezmann is a footballer who is slowly being forgotten, and yet he had six consecutive seasons with 15+ goals in his career. Alas, the Frenchman then moved from Atlético to Barcelona, where his decline began. For two years with the Catalan club, he played in the Primera 74 games, scoring only 22 goals. It seemed that the rental and return to Diego Simeone will be salvation, but in fact, the 31-year-old spent for the Indians 26 games, bringing only three goals. Nevertheless, the Madrid club prolonged the rental agreement for another year, but this chance might be his last attempt to return to his previous level.

Raúl de Tomás has had a very inconsistent career, full of ups and downs. It seemed that the transfer to Benfica after his successful years at Rayo Vallecano was a great opportunity to make a name for himself all over Europe, as the Portuguese are great at selling players, but in fact he only played seven games in Lisbon and did not produce any results. Fortunately, he moved to Espanyol, which at the time was in the Segunda. First, he played great, producing in 37 games 23 goals. In the Primera he shot 17 goals last season and the fourth place in the scorers' race.

Enes Unal has been playing at a high level for a long time, although he only celebrated his 25th birthday in May. Enes made his soccer debut brightly, scoring 18 goals for Twente five years ago in the Dutch league. After that, he tried to declare himself at Villarreal, Levante, Valladolid, but he really opened up only in Getafe - wierd enough. Last season he shot 16 goals - exactly as many as he had done in the previous three years. Of course, the Turkish striker still can develop, but it is vital for him to change the team, because it is too utopian to score in packs for the Citizens.

Spanish soccer will exist simultaneously for the second year without Lionel Messi and Cristiano Ronaldo. Both play in different leagues, which gives other players a reason to intervene in the struggle for the coveted Golden Shoe, or, as they say in Spain, for the Pichichi Trophy. A year earlier, Karim Benzema was the most adventurous in this matter, having phenomenal stats, but at the age of 34, can he continue to score so much?

Perhaps there are all the prerequisites for this. Firstly, all Frenchman's Real Madrid partners are still in the squad. Secondly, the main competitors are gathered in Barcelona, but there are so many of them that they will probably have to divide the goals between themselves. Thirdly, Karim has waited too long for his rivals to leave Spain. It is worth looking at a bet on Benzema's victory in such a situation.

Osasuna vs Cadiz Prediction: Rojillos to claim second win in a row

Mallorca vs Real Betis Prediction: Greens will be closer to winning