Real Madrid vs Chelsea: Betting on a Score Draw 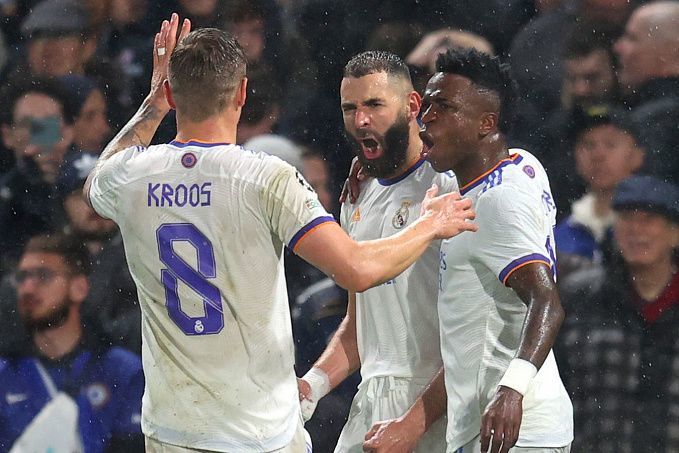 After the 1:3 home defeat, we doubt that Chelsea have a realistic chance of reaching the Champions League semifinals. However, the Blues are in a fairly positive mood, which improved markedly after the away defeat to Southampton in round 32 of the EPL.

After the international break and the defeat by Barcelona, Real Madrid played three official matches in two tournaments, winning all of them.

On the road, the Merengues closely won over Celta, and at home, they beat Getafe 2:0. Ancelotti's squad is in full control in the standings, having 12 points gap from the nearest pursuer, Sevilla. Obviously, Real Madrid have the opportunity to completely concentrate on the upcoming Champions League match. Note that Real Madrid lost their first home game in the Champions League 2021/22 against Moldovan Sheriff 1:2. After that the Whites didn't fall in the European Cup at the Santiago Bernabeu, having beaten Shakhtar, Inter and PSG one by one.

In the context of the situation around Abramovich, we should have expected the Blues to be in a slump, which they were. Immediately after the international break, the Aristocrats were thrashed 1:4 by Brentford, and in that game, Tuchel's team was the first to take the lead. In terms of statistics, Chelsea didn't concede to Brentford, but the Aristocrats were destroyed by the Bees' converting of chances. Imagine, of the five Brentford shots on goal in the second half, four were in the net.

Many thought Brentford's defeat was a fluke, but the first game against Real Madrid confirmed the fears of a breakdown in the Chelsea camp. One may say that Chelsea were unlucky again. This time, the Aristocrats encountered Karim Benzema's best game of the season. The Frenchman ended up with a hat-trick, with Real Madrid hitting five shots on goal in 90 minutes. Something indicates that he should not expect the same luck in Madrid as he did in London. There has to be a celebration for the Blues at some point. However, in order to outplay Real Madrid, Chelsea will now need to beat the top side at the Santiago Bernabeu by three goals or more. A mega challenge for Tuchel's team.

Chelsea and Real Madrid have had eight matches in four different tournaments. In addition to the Champions League, the rivals have twice played in the Cup Winners' Cup and the International Champions Cup. They once met in the match for the UEFA Super Cup. In general, there is a parity in head-to-head encounters between the opponents: +3=2-3, 12:11 minimum advantage on goal difference for Real Madrid. In the UCL, the Madrid match ended in a 1:1 draw, in London Chelsea was stronger 2:0.

Chelsea showed at St Mary's that they can score without Lukaku. Last weekend, Chelsea thrashed Southampton 6:0. It will be impossible to repeat that success at the Santiago Bernabeu, but Tuchel's wards have a clear message. The Blues are going to play offensively and win, regardless of their lineup difficulties. In order to enter the Champions League semifinals, Chelsea need to score at least three goals and that's assuming that Real Madrid would fail to do the same, which is not very believable.

We expect an over match, but we doubt that there will be a winner in this game. Real is satisfied with even a minimum defeat. Chelsea will be furious after their 1:3 home win in Madrid pounding away until the final whistle, regardless of how the situation on the field develops.

In the history Chelsea and Real Madrid have drawn twice, both times 1:1, in the Cup Winners' Cup and the Champions League. We are waiting for the total over (2.5) so we are OK with 2:2.