Inter Miami vs Nashville: Higuaín and his team to win again 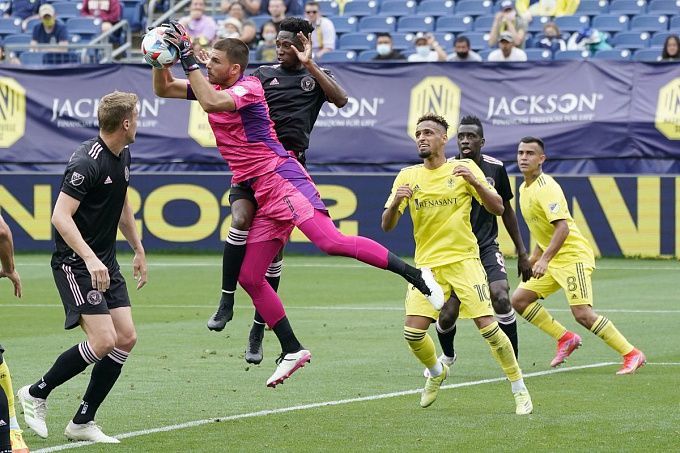 Another day in the MLS for Inter Miami to move up from the bottom of the table, but they need to beat Nashville to do so. Will Gonzalo Higuaín and Blaise Matuidi lead their team to victory?

Even with a lot of big names on the roster, Inter Miami is having a disappointing season. The team is at the bottom of the Eastern Conference standings, but two successful games can fix that. The club is still exploring options to strengthen their roster and this transfer window, Gonzalo Higuaín, Ryan Shawcross and Blaise Matuidi were joined by defender Kieran Gibbs and goalkeeper Nick Marsman. Perhaps the newcomers are the reason the team scored in 3 successive games. Also, Gonzalo Higuaín has picked up a decent form: he scored 2 goals and made an assist in 3 games. Joevin Jones and Ryan Shacross are still out of the game due to injury, the latter is doubtful.

In their last MLS game, Phil Neville's team drew Orlando 1-1. Miami stayed on defense for the whole first half and didn’t manage to score anything. The opponent did though, by setting up another corner kick just before the half time whistle. In the second half the team stepped up and in the 52nd minute when Robbie Robinson missed his chance: the defender knocked the ball out of the empty net. Soon Gibbs made it back into the net when he headed the ball into the box, only for Inter Miami to squander another opportunity a couple of minutes later. The end was left for the opponent, and Marsman was a big help at the net. The outcome was fair, but the audience could have seen more goals.

Nashville has been unbeaten for 9 MLS games in a row, moving up to the fourth place in the Eastern Conference standings. The club has recently strengthened their roster by getting Aké Loba from Monterrey, though he has yet to score his first goal for the new team. While the undisputed quarterback is Hany Mukhtar: he scored 4 goals and made 3 assists in the last six games. Nashville's roster is close to optimal right now, but there is one major loss: The center-back Walker Zimmerman is out of the game due to injury.

The previous MLS game for Nashville was a draw against the home team New England 0-0. The match was uneventful, and it was the opponent who was closer to a goal. Gary Smith's team showed the initiative by 7 shots on target, and two mistakes in defense nearly resulted in a goal. Hany Mukhtar started the game on the bench, but his appearance at halftime didn’t help.

Inter Miami has looked fairly confident in recent games, and they created a lot of chances in the away game against Orlando. At home, the team is able to add, and is sure to take the initiative from the beginning. Higuaín is in his top form, so he’ll have some chances. Nashville plays on defense, and they did almost nothing on offense in the previous game. The home team can stand up to such an opponent, and if Ryan Shawcross goes back to action, it’ll be inevitable. The odds for the game are looking great: