Calgary vs Vegas Prediction: the Knights to Earn Points in the Fourth Game 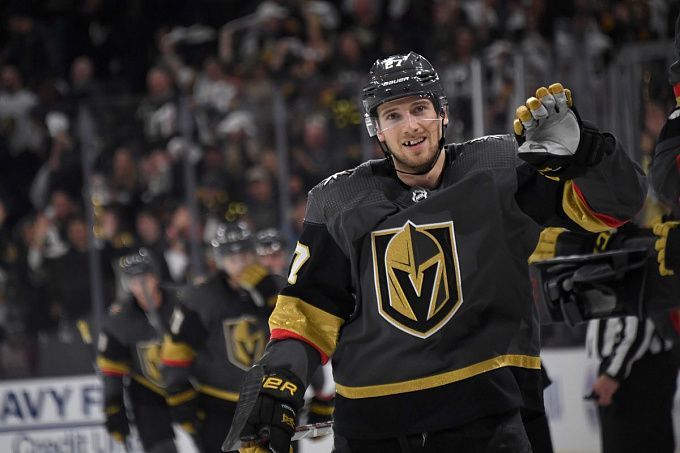 Prediction for the NHL Calgary vs Vegas match, which will take place on October 19. Who will turn out to be stronger? Check the team conditions! Several betting options are available.

Calgary has progressed every year with a very solid roster and even made some noise in the playoffs last season, reaching the second round of the Stanley Cup. It seemed as if this bunch would be dealing with even bigger challenges very soon, but in the offseason it suddenly fell apart: Johnny Gaudreau, Matthew Tkachuk and Sean Monahan suddenly moved to other teams in the league. The Flames got other hockey players, but they need time to get their act together. Nevertheless, the Red and Yellows defeated Colorado and Edmonton 5:3 and 4:3, respectively, in their first two regular-season meetings.

Vegas is still a young team, as it was formed only a few years ago. The Knights made the playoffs every year at the very least, but last year's regular season was the first time they failed and missed out on the cup battles. All of that, of course, led to a personnel change on the coaching staff, with former Boston coach Bruce Cassidy now in charge. Judging by the opening games, discipline has stabilized and the players have gained confidence. That allowed them to beat Los Angeles 4:3, Chicago 1:0 and Seattle 5:2 the day before.

Calgary and Vegas had a great start to the current regular season. They played five games together, getting five victories in regular time. Alas, one of the teams will not extend this streak. The Canadians are a historically tough team to beat as the Red and Yellow have won just once in their six previous encounters. So the visitors are the favorites.

The confrontation between Calgary and Vegas recently turns out to be very productive. In the previous seven meetings, the opponents have scored 49 goals (7.00 average). In the upcoming game as well we should expect a high level of scoring activity from the opponents, as they are in great shape right now.

Shea Theodore is a true leader for Vegas, who has played for the club since its inception, and he does not drop below a certain level. He performs well on defense, coping with his responsibilities, while being productive on offense. Last season he played 78 games and earned 52 points (14 goals + 38 assists), which is great for a defenseman! He had no scoring in his two regular season starts but the day before he did and assisted his teammate.