Columbus vs Detroit Prediction: Betting on the Total Under 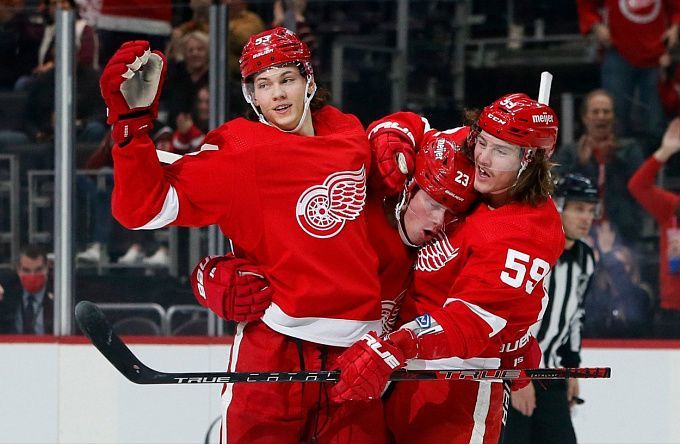 Prediction for the NHL Columbus Blue Jackets vs Detroit Red Wings match, which will take place on December 5th. Who will turn out to be stronger? Check the team conditions! Several betting options are available.

Columbus is struggling this season. It all started for the Jackets with three losses, after which they occasionally began to cling to points but nothing more. The Blue and Reds had their best result so far at the end of November when they won four out of six games but then failed three times again. The day before, the losing streak ended when Brad Larsen's team unexpectedly defeated Winnipeg 4-1 on the road. Despite that, the Blues remain in last place in the Eastern Conference standings, already ten points behind the top eight.

Detroit is another team that has spent recent years as the league's underdog, but gradually the Red Wings have begun to find themselves. Their ambitions are growing, so we can expect them to fight for a playoff spot. Derek Lalonde's wards were especially vigorous in the second half of November when they won four matches. However, afterward, they lost 2-4 to Toronto, 4-5 to Buffalo, and 1-4 to Vegas the day before. That bad luck dropped Detroit to ninth place in the Eastern Conference standings.

Columbus and Detroit have not been in the best moods lately, as they have missed too many points. The Jackets played modestly almost the entire regular season, but the Red Wings occasionally produce solid stretches. What's more, Derek Lalonde's team crushed their opponent in their first meeting of the season, 6-1, and that game was just a couple of weeks ago. Now the Red and Whites are the favorites as well.

We should expect only a few goals from the upcoming confrontation. Yes, under Brad Larsen, Columbus often plays productively, but recently the situation has changed. In the four previous meetings with the Jackets, only 18 pucks were scored (4.50 average), but not once reached the total over.