Content
To top
1.
Will Edmonton Fail Again in the Playoffs?
2.
Los Angeles Has Made a Bid for Series Success
3.
Expert Betting Tips
Users' Choice
12 200 USD

Edmonton vs Los Angeles: Will the Kings Put the Oilers in a Tough Spot? 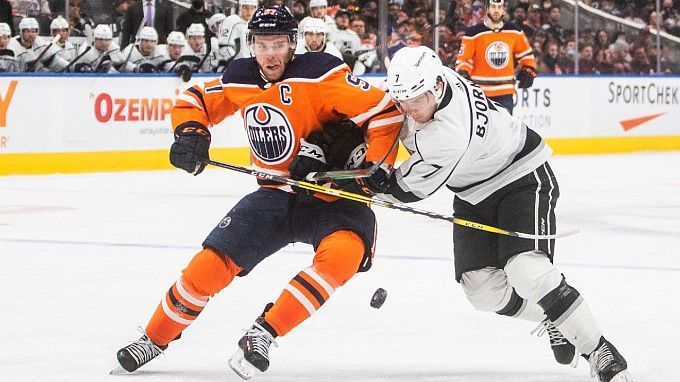 Prediction for the NHL Edmonton vs Los Angeles match, which will take place on May 5. Los Angeles took home ice advantage away from Edmonton by beating the Oilers on the road in Game 1 of their first-round playoff series. Will the Kings solidify their lead in game two? Let's pick a few bets at once. Check the team conditions! Several betting options are available.

Will Edmonton Fail Again in the Playoffs?

In all the time that Connor McDavid and Leon Draisaitl have played in the NHL, Edmonton has only managed to win one playoff series. One win in six seasons is not too little for the best hockey duo of our time? For example, Malkin and Crosby won their first Stanley Cup in the same span and lost once in the Finals.

In the first game of the series with Los Angeles, both star forwards of the Oilers made a goal each. However, that did not help win the game. Five minutes before the final buzzer, Edmonton, with the score 3:3, conceded a goal and fell 3:4. The loss was the Oilers' seventh straight in the playoffs.

Los Angeles Has Made a Bid for Series Success

In his third season with the Los Angeles Kings, coach Todd McLellan managed to lead his team to the playoffs. There was no turning back now. The Kings approached the series with Edmonton as underdogs, but in the first game they showed that the preseason implications were not entirely accurate. Incidentally, McLellan's close proximity to the Oilers' leaders helps matters too. It was under the current Kings head coach that McDavid and Draisaitl both won their only playoff series of 2017.

In the first game of the confrontation with the Oilers, LAK's second-string representatives, as well as the bottoming line, showed themselves perfectly. Trevor Moore had a goal and two assists; Alex Iafalo had 1+1 on goal+pass; Brendan Lemieux had another goal; and Philippe Danault scored the winning puck for the Oilers.

In the first game of the series, Los Angeles showed that they are definitely not weaker than Edmonton. In some areas, they're certainly stronger. For example, on the goaltending position where two-time Stanley Cup Winner with the Kings Jonathan Quick is facing not the most reliable Mike Smith.

The Kings, as the first meeting also clearly demonstrated, are superior to their opponent in terms of depth - the third and fourth three of the Kings look much more trustworthy than the Oilers' bottoming lineup. In addition, Viktor Arvidsson, who missed the start of the series due to injury, should be back in the LA lineup for Game 2, which makes the Kings the favorite for the upcoming game. Prediction: LA to win.