Content
To top
1.
Seattle are in the bottom of the standings
2.
Edmonton have lost a lot matches
3.
Expert Betting Tips
Users' Choice
12 200 USD 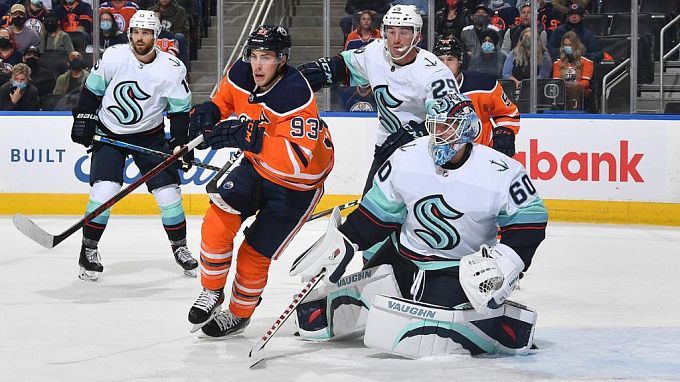 The Kraken and Oilers have already played in Seattle this season. The home team won the game. Will Edmonton be able to take revenge? Check the team conditions and choose several betting options.

Seattle are in the bottom of the standings

It is becoming more and more certain that the Kraken will not be in contention for the play-offs this season. Dave Hakstol's team are in last place in the Pacific Division and are already seven points behind even the next-to-last team.

Edmonton have lost a lot matches

The Oilers got their long-awaited win last game, beating Columbus with a score of 5:2 on their home ice. Before that game, Dave Tippett's team had lost six games in a row, five of them at home. Their bad stretch began with a trip to Seattle, and then Edmonton failed to score a single point on home ice against Carolina, Minnesota, Toronto, Boston and Los Angeles.

In total, the Oilers have 17 wins in 28 games. The team is fourth in the Pacific Division standings.

Edmonton is unlikely to lose to Seattle for the second time in a row. It's no coincidence that the Krakens are last in the division. Besides, the Oilers , who have lost 6 of their last 7 games, need to pick up points. Prediction: Edmonton will be closer to victory.