Joe Smith Jr. vs Steve Geffrard: an Underdog Will Survive Until the Final Buzzer 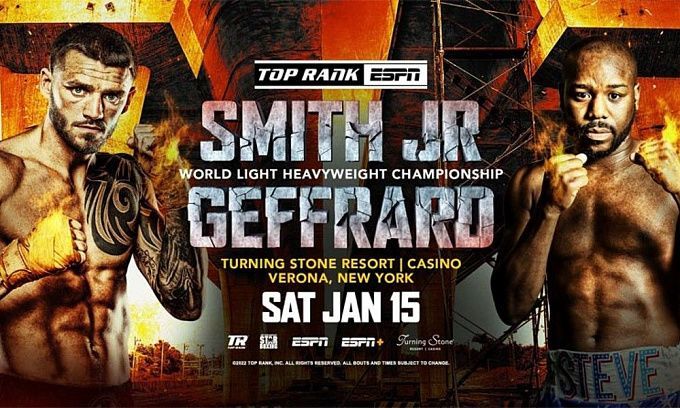 Geffrard is replacing Callum Johnson, who dropped out because of coronavirus. According to DAZN, Joe Smith’s promoters contacted several fighters to hold. However, they either declined the offer or were not at the right weight to accept it. As Steve Jeffrard was preparing to fight Gonzalo Andreasen, he agreed.

Anyway, it turned out as it often happens - Smith will defend his belt in a bout with an unrated boxer.

Smith won the belt in a fight with Maxim Vlasov in April 2021, and he is going to defend the title for the first time. He’s a hard puncher with a great jab, but most importantly, he’s as tough as a bull and patient. Smith is a very entertaining boxer, he’s smart, and he’s definitely in the top not for nothing.

I accomplished the primary goal of becoming a world champion, but now I have other goals set for myself. I want to try to unify eventually. I’m hoping after this fight I get a shot at Beterbiev or redeem myself against Bivol or even fight the pound-for-pound king, Canelo. If that fight (against Jacobs) happens, great, but I want these big fights. We just have to wait to see what happens. All I do is focus on my fight and see what comes of it.

Steve Jeffrard: Not a Top-15 Boxer

Steve Jeffrard lost only the first two fights of his boxing career. Since then, he has not suffered a single defeat and has won 18 bouts in a row. You won’t find many familiar names among these boxers, except the last one - he beat Denis Grachev (UD 8) in spring 2021.

One moment I’m thinking about boxing on a local show, then the phone rings for a chance to fight for the WBO world title on ESPN. Unreal!

The analysts do not see any competition in this fight. To be honest, I don’t believe not only in the upset but also that the underdog will survive until the final buzzer. Prediction: a total under (6.5).