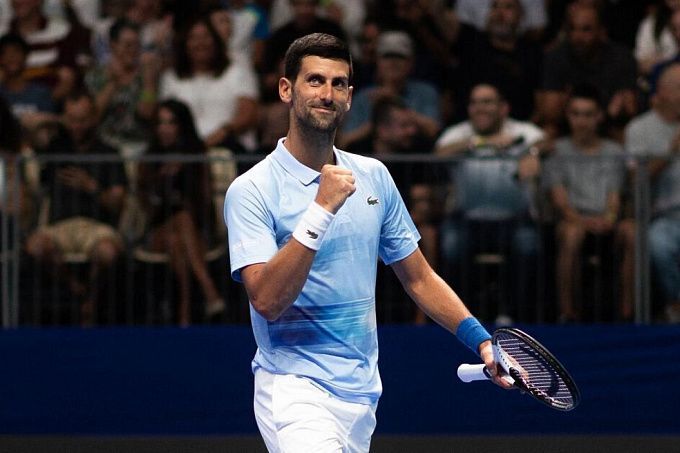 The seventh-ranked player in the world, Novak Djokovic, will face the world's number 16, Marin Cilic, in the final of the Tel Aviv tournament. The men have played each other more than twenty times, the Serb has a huge advantage, however the Croatian has two wins, including one indoor.

As we expected, the match against Safiullin wasn't a cakewalk for Novak, especially the second set, however, the Serb gets to the final, where he will meet his old rival. Novak has three wins in three games and not a single set loss in Israel. In the match against Roman, Djokovic served out seven times and had two double faults, won 84% of points on the first serve and 43% on the second, on the receiving end he got 34%/78%, 14/10 statistics of winners/unforced errors.

I think it was a very competitive match, especially in the second set. I must say I was quite emotional on the court today in the second set, there was a lot of tension, and that was also due to his aggressive style of tennis. Big serves, and when he has time, he’s so solid from the forehand and backhand corner. I knew that I had to stay very strong, and that he was definitely going to raise his level in the second set, which happened. I was serving for the match and played a couple of loose points, but credit to him for fighting back. It was an enjoyable evening on the court for sure.

Novak Djokovic after his match against Safiullin

Cilic played two full matches in Tel Aviv, against Tim and Lestienne, Brody withdrew in the third round. The semifinal match against Lestienne lasted an hour and 45 minutes, Cilic won it 7-5, 6-3. Cilic served 14 aces with two double faults, winning 86% of his first serve points and 46% of his second serve points. On the receiving end Marin showed 33%/62%, 29/24 on winners/unforced errors.

Head-to-head meetings between Djokovic and Cilic

19:2 - that was the score of the encounter in favor of Novak. Cilic won on the grass court in London and indoors in Paris, and the last time the Balkans played each other was the Davis Cup was in December 2021. Then Novak beat Marin in two sets.

Cilic is showing good form now, and in the preview of the Djokovic-Safiullin match we mentioned that the Serb has problems with players who have a strong serve. Cilic serves well, so it will be a long match. That said, we shouldn't forget that Djokovic is fighting for a place in the ATP Tournament, and it wouldn't hurt to beat the stubborn Croatian once more. By the way, beating Cilic will be the 20th victory in Novak's career, the jubilee one.