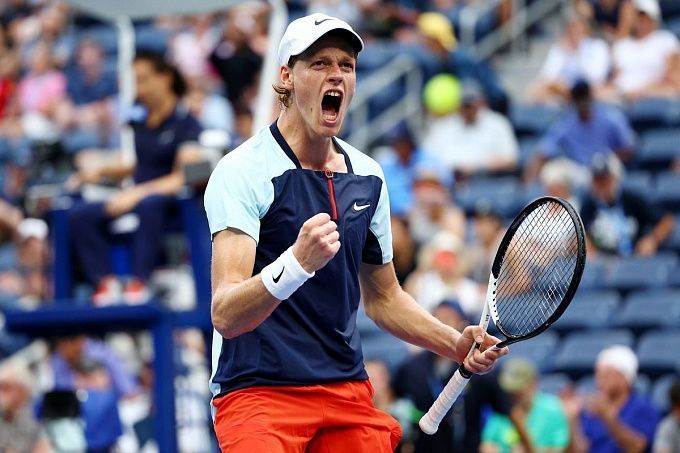 No. 13 Jannik Sinner will face ATP No. 4 Carlos Alcaraz in the US Open quarterfinals. The guys have played each other four times on the tour, so far in the confrontation parity, 2-2, with the Italian beating the Spaniard in two latest matches. However, bookmakers consider Alcaraz to be the big favorite.

Jannik was lucky with the draw. Alcaraz is the first powerful tennis player on his way. Before that, Sinner played against Altmaier, Eubanks, Nakashima, and Ivashka and lost these games in five sets to the latter two. So the bookmakers consider Sinner to be the outsider. The match against Ivashka lasted almost 4 hours, Jannik led 1-0 and 2-1, but Ilya leveled the score. Sinner had many faults on serve - 5/14 of aces/doubles, 73%/49% on first serve, 39%/67% reception stats, 46/55 of winners/unforced errors. The stats aren't great, but it was enough to beat the 73rd player in the world.

Carlos also had a long match against Marin Cilic in the last 16. The match lasted nearly four hours, 6-4, 3-6, 6-4, 4-6, 6-3. The Spaniard stats: 3/4 aces/doubles, 62%/60% won points on first and second serves, 26%/52% on reception, 28/41 of winners/unforced errors. If we take the stats, the Spaniard wasn't very impressive, he had plenty of faults, but the Croatian had even more. Before the match against Chilic, Carlos knocked out Baez, Coria and Brooksby without giving a single set.

Sinner and Alcaraz have played difficult matches in last 16, not the best in terms of statistics, but winning ones. Despite recent results in head-to-head encounters, the bookmakers are siding with the Spaniard, which we do not agree with. We believe that Sinner at the moment is the most uncomfortable opponent for Alcaraz. There is a feeling that Carlos would rather play with Nadal than with Jannik. As for the total, we expect a long match. The opponents are about the same level, so the outcome will depend on little things and nuances.