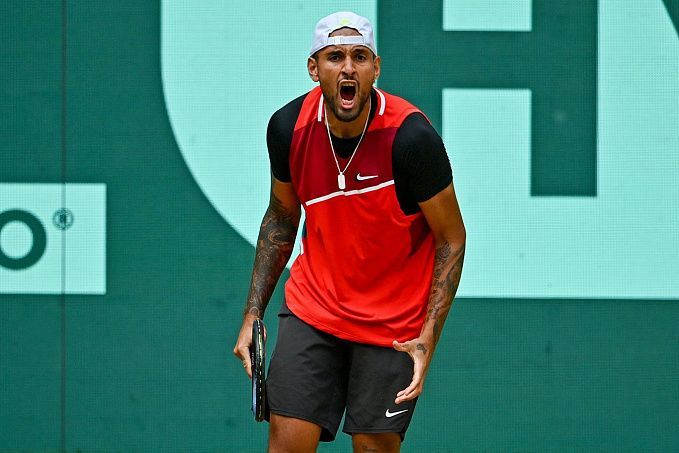 Nick Kyrios has an excellent opportunity to enter the Wimbledon quarterfinals as he is challenged by Brandon Nakashima, the world No. 56 from the United States. The guys have not crossed each other in the tour yet, and the bookmakers are siding with Kyrios.

Nakashima became quite a bright figure on grass this season. The American played in Hertogenbosch and Eastbourne. At Wimbledon, he knocked out Kuhn, Shapovalov, and Galan Riveros. The result is already quite good, considering that Brandon is only No. 56. However, he was lucky with the draw. His strongest opponent before Kiryos was Shapovalov, No. 16, but Denis failed in the grass part of the season, so we don't pay much attention to this victory. We doubt Nakashima has a real chance of making it to the next round. The third-round match against Galan Riveros lasted less than two hours, a 6-4, 6-4, 6-1 win for Nakashima. Note no double faults in the match and 25/14 winners/unforced errors statistics.

The Aussie, meanwhile, had a tougher draw. In the first round, in five games, Kyrgios beat Jubb, the world No. 219, of Great Britain. Then he crushed Krajinović in less than an hour and a half and knocked Stefanos Tsitsipas out. The match between the Australian and the Greek was by far the loudest in the men's draw, as the duel was enjoyable. There was enough tension and intrigue. Tsitsipas won the first set on a tiebreak but gave the next three games, including the fourth set on a tiebreak. The match lasted over three hours. Nick made 14 aces and one double fault, won 81% of points on the first serve and 53% on the, 61/31 are the winners/unforced errors stats. Tsitsipas had 57/36, very high quality and controversial match.

Kyrios is having a solid tournament, defeating Stephanos Tsitsipas, one of the main favorites. So there is little doubt that the Australian will beat Brandon as well. We don't think the American has enough form and resources to win more than one set. We won't be surprised if Nick wins in three sets.