Brazil vs Turkey Prediction: Gabriela Will Hurt Her Coach, Whom She Made So Happy 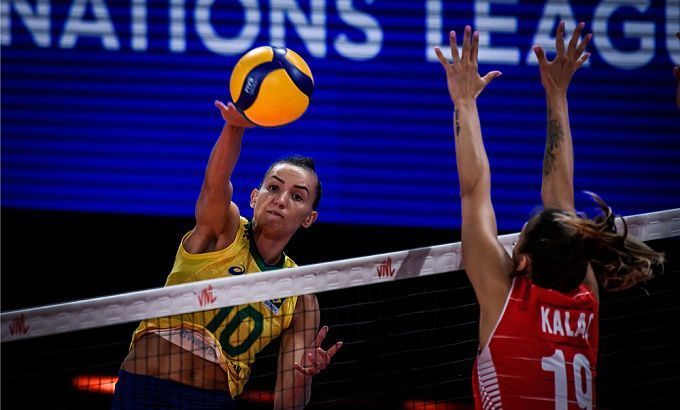 Giovanni Guidetti will watch Gabi's play and wonder: «How come she's not on my team?» Alas, Giovanni, this is not VakıfBank and this time Gabriela Braga Guimarães will be hammering your team, not another.

The second NL week for Brazil came at home. That means José Guimaraes has picked the best - no second lineups, otherwise the fans won't understand. Gabi will lead the team on the court - how else could she not? Consequently, the Brazilians offense, firstly, will speed up, and secondly, become more effective.

In general, any team of Brazil plays the same way - a few aces, many blocks and very few errors in receiving, and especially in the serve. Each loss of serve is special for the team.

The Turks lost one match out of four in the first week and Brazil. They block well, serve sharper than Brazil, and make more errors. Bookies do not offer us handicaps - only totals.

During 14 games played in Ankara, the Turks put 40 blocks. The record is 13 blocks in the four-set match with Belgium. We suppose they won't have anything similar against super-strong Brazil - Gabi and her teammates play at a different speed. So it will be difficult for Turkey to block effectively.

As for serve errors, considering the Brazilian reception, the Turks are likely to make trouble for the opponent and mistake themselves.

Also, we doubt that the aces' stats will reach the over even in the longest match.

The last thing is the number of points and the total of points. The Turkish team just crossed the ocean and probably suffers from jet lag. At least the climate is similar. We don't think the match will be protracted.

Bookmakers offer odds above 1.8 on a point total under 183.5. Perhaps this is the best choice, given that Turkey is currently visiting another continent.