5G FWA: more of a challenge than a complement to fixed broadband

5G FWA: more of a challenge than a complement to fixed broadband

Operators tend to think about 5G fixed–wireless access (FWA) in one of two ways:

These business models are quite unalike, and they depend on local factors. That makes assessing the addressable market for FWA complex. This comment accompanies Analysis Mason's recently published report, 5G fixed–wireless access: the market opportunity for operators and vendors, which assesses the opportunity for both models in 60 countries.

People misunderstand each other when talking about FWA

At a conference of Norwegian operators where I spoke this month, the dominant view was the first. This is unsurprising: Norway has 59% FTTP coverage, 82% 100Mbit/s coverage, and it has just one, small, mobile-only player. The view was that 5G FWA offers the possibility of reaching customers that would not otherwise be reachable, but no more; it does not weaken the FTTP business.

Operators in less fiber-rich markets than Norway have a different take on the matter. Dave Dyson, CEO of Hutchison 3G UK (Three) recently said "certainly in a significant majority of the country, I strongly believe 5G can offer a good enough home broadband experience for people to effectively ditch their copper or fiber connection".

In neither case is anyone really talking about 5G fully replacing the fixed networks: it is more a matter of degree. Our study suggests that the market opportunity is for about 20–30% of broadband connections in developed economies by 2023, higher in emerging ones. That is an addressable market of 290 million static locations. We forecast that the challenger opportunity will be about twice as large as the complementary opportunity. 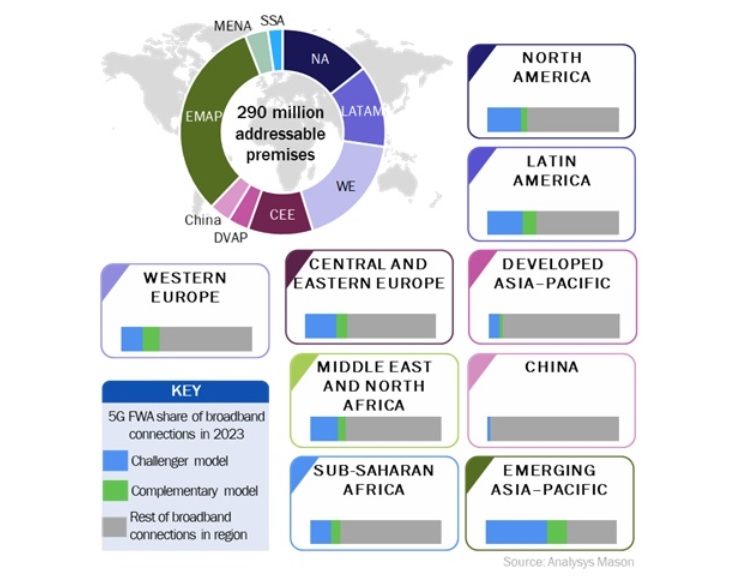 The cost and logistical difficulties of large-scale FTTP roll-outs mean that large retail broadband players will increasingly have to buy in some of their connectivity. Few will do it all themselves. So, the pivotal question is: "What is the economic trade-off between self-supply 5G FWA and wholesale FTTP/cable?" A further important question is how to allocate the cost of 5G FWA against 5G mobile. In our report, we suggest that per-subscriber self-provision costs of 5G FWA and typical wholesale FTTP access costs are nicely balanced, but an operator could easily pivot one way or the other because there are so many variables.

Early 5G is a platform for further investment in capacity

It is early days, but 5G FWA currently looks somewhat compelling from a purely performance perspective. Mid-band variants are marketed with speeds no faster than FTTC-type copper solutions (100Mbit/s), and even Verizon's initial mmWave roll-out looks as if it has severe limitations in reach, although it doubtless can and will get better.

Hence those that see 5G FWA purely as a complement tend to roll their eyes and ask what relevance it has in a fiber-rich world. The answer is that it could easily be a price-play, especially where the fixed wholesale layer is weak. Consumers do not automatically buy the best, and with a compelling price and service offering (or rather lack of unwanted service offering) boosted by the novel cachet of '5G', they might start to do so, especially if they have not traded up from DSL.

I have argued elsewhere that the capacity angle to 5G tends to get overshadowed by – sometimes incompatible – longer-term thinking centered on new use cases and service-based slicing. The operators that emphasize this brave new world are usually the largest, with deep investment in FTTP or cable. Mobile-only operators often see it differently, and they see the potential immediate, more old-world, benefits of 5G as a capacity play. Dave Dyson again: "[With 4G] operators can compete on speed, but not capacity. The capacity part of 5G is the true revolution".

The 5G FWA service might not initially attract many customers, and MNOs will still be wary about impairing mobile performance despite the massive headroom afforded by 5G. But starting with a smallish, price-sensitive customer-base, 5G FWA can – perhaps more than 5G mobile – be a platform for further investment, and that is where fixed and mobile investment profiles completely diverge.

FTTP investment is "spend big and win big". It raises high barriers to competition, and if faced with price competition network owners can adjust, knowing that they will win in the end even if payback is postponed. Norway provides an extreme example: break-even capex on FTTP networks is about NOK25 000 (USD3000) per premises and networks get a quasi-monopoly 70%+ conversion rate. Few operators can afford that kind of money, or expect that kind of result, but the principle is always the same.

5G is quite unlike this. When licenses are acquired, investment can be incremental. An MNO can boost capacity and even add further small cells where they are needed in quite a tactical manner: a just-in-time, analytics-based, approach that does just enough to keep customers happy and win some churn. It is more difficult to be tactical with FTTP.

These two approaches are reflected in larger capex trends. In our operator capex analysis, we do not see a sudden spike in mobile capex caused by 5G; it will rather be a slow accretion. FTTP can be a mighty chunk of capex for some operators, but it is one-off and eventually dwindles to maintenance and infrequent optical line terminal (OLT) upgrades that are small change compared to the costs of the passive network.

5G FWA will not conquer the world, but it could cause fixed operators some pain

It is willful blindness for those fixed operators that are still facing years/decades of investment in FTTP to say that 5G is inferior to what they have planned and therefore unthreatening (although they might still have to use it for otherwise hard-to-reach areas). It may even be a bit blinkered of those fixed operators with gigabit-capable networks in place to ignore the potential challenge of 5G FWA price-plays whose customer segmentation is willingness to spend, not geography. Wireless will probably never conquer wireline broadband: the long-term total cost of ownership and lifetime-value of FTTP look very compelling, and FTTP is without doubt the superior solution for fixed locations. However, challenger 5G FWA could nevertheless creep up stealthily and cause real pain.