Mobile radio technology is moving from 4G to 5G, but it cannot move in isolation. Operators learned this valuable lesson with the move to 4G. In particular, the transport layer, often referred to as mobile backhaul, became a network choke point at cell sites with upgraded 4G mobile radios and legacy backhaul systems. To avoid these past mistakes, operators are placing as much emphasis on the transport layer as they do on 5G mobile radios.

One area of concern for operators planning their transport layer is determining whether the mobile backhaul network must shift away from wireless systems, such as point-to-point (PTP) microwave, to fiber-based systems, such as packet transport network (PTN) systems.

The main issue, of course, is not the cost of the equipment; it is the cost of either installing fiber, maintaining fiber (ex. fixing fiber breaks), or leasing fiber. One of the benefits of a wireless backhaul system is the freedom from incurring the high cost of owning a large fixed asset-a fiber plant. The second issue is operators have already invested a large amount of resources (time and money) on the 4G backhaul network using a mix of fiber and wireless systems.

We estimate that by the end of 2017, the percentage of macro cells using wireless backhaul systems was approximately 45%, so one can imagine the cost if all those cell sites have to be retrofitted with fiber links. The good news for the operators and major microwave vendors-Ceragon, Ericsson, Huawei, NEC, and Nokia-is that we do not think this will be the case. In fact, we think that 5G will bring back a growing demand for PTP microwave.

In our latest study of mobile backhaul and microwave (July 2018), we assessed that operators have installed fiber and microwave backhaul capacities ranging from 50 Mbps to 500 Mbps in their 4G networks. Therefore, with a 500 Mbps backhaul link, a mobile phone user will likely experience a peak download speed ranging from 65 Mbps to 130 Mbps in a non-congested area, based on factors such as the distance from the antenna, number of antenna sectors, and spectrum. With a 50 Mbps backhaul link, the user peak download speeds should be about 1/10th of those values.  Is this capacity enough for 5G? Perhaps initially but it is unlikely for the long term. That being said, we also predict that only a few sites will be installed to operate at the maximum 5G advertised user download rate of 20 Gbps. So, what do we think?

Microwave has plenty of capacity

We think that in most cases, a 5G mobile radio network will double or triple the user download speed from what users have experienced with 4G. Research we have seen states that the average 4G user experiences only about 20 Mbps of download speed with the more developed countries such as Singapore and South Korea averaging closer to 50 Mbps. Therefore, if an operator aspires to triple this download speed, a cell site with six sectors would likely require no more than about 1 Gbps of backhaul capacity, which can be accomplished with PTP microwave.

The latest microwave systems operating in E-band (70/80 GHz) have 10 Gbps of link capacity over a single carrier and 20 Gbps over dual carriers. Hence, the use of wireless backhaul systems becomes a point of congestion only when the backhaul link capacity requirement exceeds 20 Gbps, which can provide a user download speed exceeding 2.5 Gbps.

Simply stated, PTP microwave will meet the capacity demands of most 5G macro cell sites for many years to come, and operators that want to stay with wireless backhaul over fiber can continue to do so with 5G. 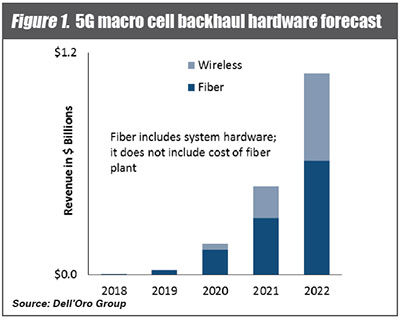 Due to our outlook on the future transport needs of 5G, we forecast that mobile backhaul equipment upgrades for 5G macro cells will begin in 2018 at a revenue level below $5 million and then increase annually through 2022, surpassing $1 billion.

The majority of these 5G backhaul links are expected to use fiber-based equipment in the beginning because most of the 5G roll out will be in fiber rich countries such as China and the United States. However, the use of PTP microwave systems is expected to increase significantly when regions that typically leverage wireless backhaul, such as Europe, the Middle East, Africa, and India, begin to roll out 5G networks, beginning with Europe in 2020. 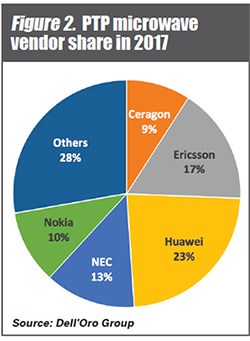 This will greatly benefit the top microwave systems vendors, especially the largest market leader Huawei, that would otherwise be selling into a declining market. We predict that without 5G, the microwave market would decline at an average annual rate of 5% for the next five years.

The transport layer will play an important part in defining the success of 5G, just as it did for 4G. This means operators will need to continue upgrading mobile backhaul capacity to meet the increasing amount of user bandwidth. The good news is that 5G will not force operators to forego wireless backhaul for fiber, operators without an intention to own fiber plants will not be disadvantaged, and PTP microwave vendors will continue to see many more years of growth.