The research firm also said that the three main chasing cloud providers – Microsoft, Google and IBM – are gaining ground but at the expense of smaller players in the market.

In aggregate, the three have increased their worldwide market share by almost five percentage points over the last year, helped by particularly strong growth at Microsoft and Google, and together now account for 23% of the total public IaaS and PaaS market.

The next ten cloud providers in the ranking have slipped off the pace a little, though this group does include Alibaba and Oracle who continue to grow at impressive rates. There is then a very long tail of small-to-medium sized cloud service providers, whose collective market share has now dropped to just 18%. 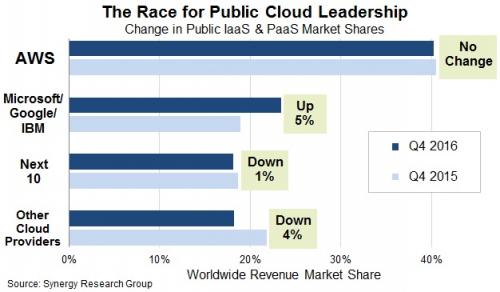 With most of the major operators having now released their earnings data for Q4, Synergy estimates that quarterly public cloud infrastructure service revenues (including both public IaaS and public PaaS) have now reached well over $7 billion and continue to grow at almost 50% per year.

If managed private cloud services are included, quarterly cloud revenues are now well over $9 billion. The cloud providers and rankings are very different in the managed private cloud, where IBM continues to lead while Rackspace and traditional IT service providers feature more prominently than they do in public cloud.

“While a few cloud providers are growing at extraordinary rates, AWS continues to impress as a dominant market leader that has no intention of letting its crown slip,” Synergy Research chief analyst and research director John Dinsdale said.

“Achieving and maintaining a leadership position in this market takes huge ongoing investments in infrastructure, a continued expansion in the range of cloud services offered, strong credibility with the large enterprise sector, consistently strong execution, and the wholehearted and long-term backing of senior management. AWS is checking all of those boxes and any serious challengers need to do likewise.”