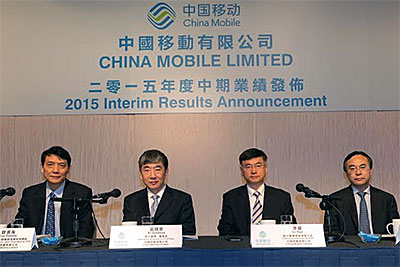 China Mobile’s announcement came a day after smaller rival China Telecom revealed that its first half fell 4% to 11 billion yuan on higher tax.

China Mobile, which is the dominant mobile carrier in the country, has been pushing aggressively in its 4G roll out, with 940,000 base stations being in use in the first half of the year.

The company also managed to sell 140 million 4G handsets in the first six month and increase its 4G subscribers by 100 million to 190 million, accounting for 23.2% of overall customer base.

The operator's overall customer base reached 810 million, up just under 11 million from the end of 2014. The monthly average revenue per user declined from 64 yuan to 62 yuan, as 55% of its subscribers were still on its 2G service.

China Mobile chairman Xi Guohua said the company will continue to enhance its network capability and coverage to achieve a nationwide 4G network.

He said the company will maintain its 2015 capex forecast at 199.7 billion yuan, including 72.2 billion yuan for 4G business.

The cost of handset subsidization was reduced 68.8% in the first half from a year back, and the whole year cost will be lower than the estimated 17 billion yuan.

Xi said the proposed deal will help China Mobile - which was granted a fixed-line license in December 2013 - expand its footprint in the country’s booming fixed broadband market and rapidly promote full service to its customers.

“This is to obtain quick access to core resources of fixed-line broadband and enhance our operational and managerial efficiency," he said.

Xi added the value of the proposed acquisition is yet to be determined and is expected to be completed by the end of this year.