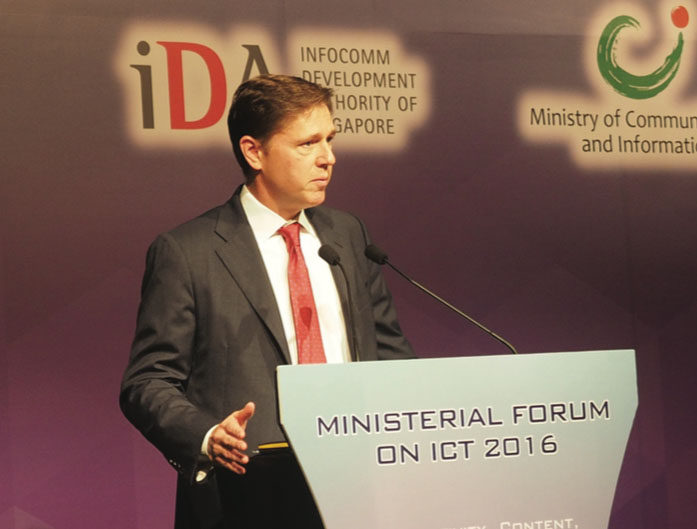 Kevin Martin (pictured), Facebook’s vice president for mobile and global access policy, spoke of the “four billion unconnected people today” at the Infocomm Media Business Exchange Ministerial Forum on ICT at CommunicAsia2016 on Monday. These individuals fall into three main categories, he said: 90% have problems with access, 50-70% awareness and only 11-25% cite affordability as the main reason they are not online.

Martin, who joked that he went from being the youngest chair of the FCC to one of the oldest employees in Facebook, said that on the connectivity front, Facebook has built a fleet of solar-powered, unmanned UAVs. These could fly for three months at a time, have the wingspan of a Boeing 737 and deliver Internet from 60,000 feet. These drones will be flying before the end of the year to test the technology.

This solves the middle group. For the extremely remote, Facebook has partnered with Eutelsat for the Amos-6 high throughput satellite and in urban areas, Facebook is testing Terragraph to solve the issue of mobile network congestion: 60-GHz networks spaced 200-250 feet apart in dense urban areas.

Then there is express Wi-Fi - using off the shelf components and unlicensed spectrum to extend coverage to villages or communities just outside the reach of commercial networks.

Martin was keen to stress that Facebook always seeks to partner with existing operators rather than supplant them. For Express Wi-Fi Facebook has offered a platform so that villagers in remote areas can resell the Wi-Fi that runs through commercial network providers.

Much of the other technology will be like Facebook’s open compute platform - once the designs are perfected, the technology is open sourced so that the industry can drive down costs and take advantage of increased flexibility at the same time.

Facebook seeks to use those same principles to help drive down costs for the telecommunications industry with its telecoms infra project. Working with Deutsche Telekom, SK Telecom and others, Facebook will share different learnings in hardware and software to increase efficiency and agility as well as lower costs, said Martin.

He spoke of the success of Facebook’s Free Basics program - formerly Internet.org, Free Basics is a partnership with telcos to provide free access to basic, non-multimedia ad-free services. This has had a huge success in some countries with the number of people accessing government data through Free Basics growing by as much as 14-fold. In the Philippines the big success was government news and job sites.

The value to the operator in providing free basics is that once people have tried free access, half the subscribers move onto a paid program within 30 days.