AWS is the undisputed leader in the cloud infrastructure market with 17% share.

Microsoft has 9% and Google has 5% share in the cloud infrastructure market last year, said IHS. Equinix and China Telecom had 4% each. 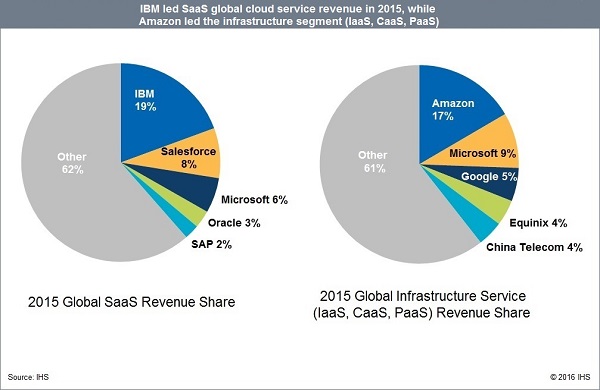 IHS says the infrastructure-as-a-service (IaaS) segment for on-demand servers and storage is maturing, with the big three players – Amazon, Microsoft and Google – possessing the scale and specialized knowledge to make it difficult for smaller players with undifferentiated services to compete.

However, there is room for innovation in IaaS. Rackspace has expanded its professional services to third-party clouds such as Amazon and Azure.

Colocation or hosting, the earliest form of IaaS, is also growing. Equinix and Level 3 expanded their data center footprints.

Google released a machine learning service for developers, and IBM released three new Watson application programming interfaces (APIs) that provide developers with access to technology for sensing emotional and visual cues that deliver insights on the tone, emotional context and sentiments of voice, text and images.

CSPs are making steps towards the "meta-cloud." Google announced new dashboard and orchestration tools that can manage and migrate workloads in its own data centers as well as in Amazon’s and on-premises data centers. In addition, NTT enhanced its enterprise cloud services with the ability to connect to third-party CSP data centers.

The off-premises cloud service market is forecast to reach $278 billion worldwide in 2020, with a five-year compound annual growth rate (CAGR) of 25%.