Microsoft is now challenging for leadership in the enterprise SaaS market.

A report from Synergy Research Group also said that in 2015, Microsoft grew its market share by almost three percentage points but was still a little way behind long-time leader Salesforce.

However, Microsoft continues to grow its SaaS revenues much more rapidly.

The other top ten players in the market are Adobe, ADP, Google, IBM, Intuit, Oracle, SAP and Workday, the research firm said.

Microsoft achieved the second highest 2015 revenue growth rate among the top ten SaaS companies. SAP, Adobe, IBM and Workday all achieved 2015 growth rates in excess of 50% and Oracle too is now surging ahead.

The enterprise SaaS market grew by almost 40% in 2015 and Synergy forecasts that it will more than triple in size over the next 5 years.

The smaller consumer SaaS market is only a third the size of the enterprise market and also has a lower growth rate, the research firm added.

While it is not the leader in consumer SaaS, it is notable that Microsoft’s growth far outstrips that of other major consumer SaaS operators. 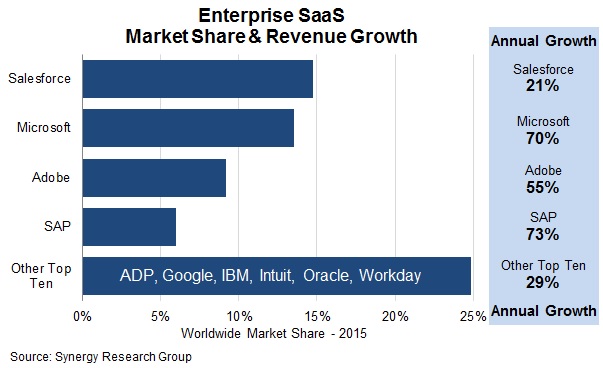 John Dinsdale, chief analyst and research director at Synergy Research Group said, “in many ways SaaS is a more mature market than other cloud markets like IaaS or PaaS.”

“However, even for SaaS it is still early days in terms of market adoption. It is notable that the big three traditional software vendors – Microsoft, Oracle and IBM – are all now growing their SaaS revenues faster than the overall market and yet SaaS accounts for less than 8% of their total software revenues,” the analyst said.