The South Korean mobile giant said the agreement will be signed during the MWC 2018, which kicks off next week in Barcelona, Spain.

5G-PON, one of 5G network’s core technologies, is a next-generation technology for distribution networks that connects radio units, such as antennas and heavy machinery installed at the premises with baseband units. It can improve the quality of mobile communications in remote rural areas.

“Whereas traditional wired network needs to be installed inside a building for power supply, 5G-PON can be operated without a power switch, allowing it to be more conveniently deployed outdoors,” SK Telecom said in a statement.

5G-PON can facilitate data delivery by simply installing base stations and antennas without the need of additional networks. This means the solution can be more conveniently and quickly implemented nation-wide. 5G-PON also uses about 20% less time to deploy than with 4G-LTE networks.

SK Telecom launched a project to develop 5G-PON in collaboration with local vendors, including Solid, HFR, SunwaveTec and Coweaver in 2015. The solution has been deployed in the carrier’s network since last November.

The operator will also use the event to showcase its 5G advances and partnerships, giving Mobile World Congress visitors an idea of where 5G technology is headed.

Under the theme of 'Perfect 5G', SK Telecom will lay out the company’s 5G services. The operator will show off real-time data streaming over the 5G NSA (Non-Standalone) standard defined by 3GPP, and a 5G-LTE interworking technology that transmits data continuously by crossing between two frequency bands, the LTE band of 2.6GHz and the 5G bands of 3.5GHz and 28GHz.

SK Telecom will also demo its 5G self-driving car - which completed trial driving early this February. Through a separately installed screen, an image of its autonomous vehicle using vehicle-to-everything (V2X) that spots passengers and accidents on the road and its 3D HD map will go on display.

The company also plans to showcase its ‘hologram AI’ service and introduce ‘oksusu Social VR,’ its newest VR innovation that enables users to chat while watching videos together. 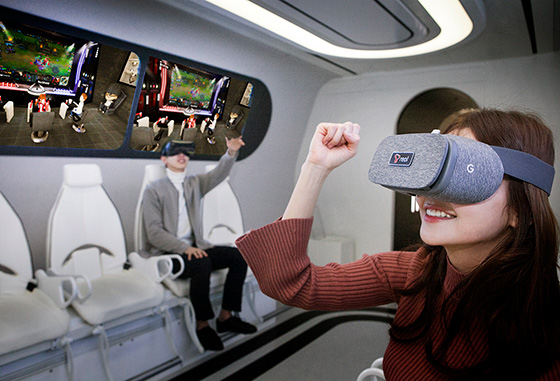 A number of "oksusu Social VR" users are watching the game of "League of Legends" in virtual space.