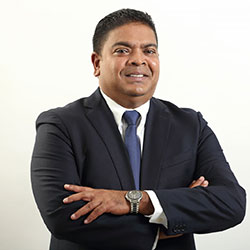 Commenting on the appointment, Mobitel said Perera’s strong track record “makes him the natural choice to lead the company on a forward momentum to the next phase of its evolution.”

“He brings to the table strong insights into product and channel development, human resource management and more importantly, his understanding of the telecommunication industry as a whole, apart from his expertise in mobile telephony. His contribution to Mobitel has earned the company many accolades, including several local and international awards.”

Perera brings 30 years of experience in mobile industry to his CEO role. He commenced his career in mobile telephony with Celltel in 1989, and led the introduction of the prepaid concept to Sri Lanka and its entire supportive ecosystem, which revolutionized the mobile industry and was the main contributor for the rapid growth in the sector in the country.

BT has appointed James Hennah as managing director for its South East Asia operations. He succeeds Ron Totton, who has recently taken on a new role as vice president in charge of BT’s operations in Switzerland, Nordics, Central & Eastern Europe and Russia (SNCR).

Hennah joined BT in 1997, and was most recently CEO for BT’s global Media & Broadcast business and MD of carrier, channel and MVNO sales in BT’s Wholesale & Ventures division.

Mark Russell, president of Europe at Global Cloud Xchange (GCX), is expanding his role at the company after working for the Reliance Communications subsidiary for two years.

Russell will take over the role as managing director of GCX International in charge of the company’s global sales across all segments, while continue to working for the company as president of Europe, GCX said Wednesday in announcing the appointment.

Russell joined GCX in 2015 as president of Europe, where he has been instrumental in building the company’s capabilities and driving organic and inorganic growth across GCX’s European footprint, the company added.

Russell has over 25 years of telecoms and technology experience. Prior to joining GCX, he had held senior management roles at companies including NetApp, UK software company Empower Interactive and MCI (now Verizon Business).