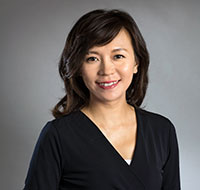 The move comes more than a year after Douglas Li tendered his resignation.

Yip took the helm of the company from June 16, replacing Stephen Chau Kam-kun who took on the role of interim chief executive on September 1 last year.

Chau remains as an executive director and the chief technology officer at SmarTone, according to the company.

Before joining MasterCard, Yip served as managing director for corporate planning and international strategy at United Overseas Bank in Singapore

Previously, she was a partner with McKinsey & Company in Greater China where she led the Asia Payments practice and co-led the Asia Financial Institutional Group.

"I am honoured to be appointed as the chief executive officer of SmarTone and look forward to leading the company into the next chapter of growth and success," said Yip.

"With my rich experience in leading organizations to build a customer-centric culture and drive superior customer engagement across multiple channels, I am confident that SmarTone will achieve even better business growth."

Telenor Group has appointed Irfan Wahab Khan (pictured) as CEO of Telenor Pakistan. He has also been appointed to the group executive management team.

Most recently Khan is deputy CEO and chief marketing officer of Telenor Pakistan. He has been with Telenor for 12 years and was the first employee in Telenor Pakistan when he started as executive vice president and head of corporate affairs division in 2004.

Since then he has served in various positions within Telenor Group both in Asia and Europe, including vice president devices and vice president and head of Asia distribution. Khan is also a Board Member of Tameer Microfinance Bank.

Khan will assume his new roles on August 1.

Previously Ozaki was head of carrier relations and planning division of global business at NTT Com. He has played a critical role in expanding the Japanese telco’s overseas business and developing relationships with other ICT partners around the world, and has participated in many corporate investment and M&A projects in Asia.

Apart from Ozaki’s appointment, Theodoric Chan has taken up the role of chief commercial officer and will oversee the company’s sales and marketing strategies.

Taylor Man is promoted to chief technology officer and will oversee the company’s product strategies.

Meanwhile, Brandon Lee, the former chief strategy officer of NTT Com Asia, has joined NTT Holding Company to develop the group’s global business. He will remain a member of NTT Com Asia’s board of directors.