Brooklyn vs Milwaukee: The Bucks will fly better in game two. 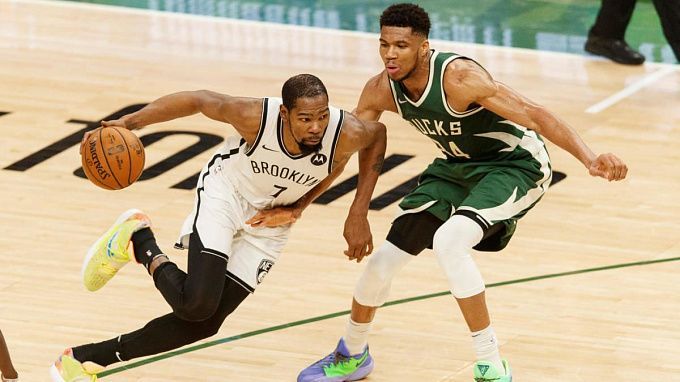 The Nets took the first game of the series with Milwaukee with confidence - James Harden left the floor early in the game due to injury, which, oddly enough, embarrassed the Bucks a lot more than the home team. Could Milwaukee regain the balance? Going home 0-2 in the series will be very difficult.

Brooklyn has found a reserve

Needless to say, James Harden played a big role for Steve Nash's team. Nevertheless, even without their star point guard, Brooklyn found something to offer on offense and erased the issue of the winner long before the final siren. 115-107 - we should say that the final margin could have been much bigger.

Clearly, Brooklyn's leaders scored the lion's share of the points. Kevin Durant had 29 points; Kyrie Irving had 25. But the superstars weren't the only ones. Joe Harris had a good game, scoring 19 points and making 5-of-9 from beyond the arc. Blake Griffin was outstanding in the paint with 18 points and 14 rebounds. Harden was replaced directly by Mike James. The ex-CSKA guard scored 12 points and a +12 assist. A real x-factor!

The Bucks had a chance for a very easy win. After James Harden left the floor, Mike Budenholzer's team should have acted more quickly and finished him off while the opponent was knocked down. But it didn't happen - the Bucks were relaxed, paid no attention to the growing gap in the score, and when the situation became critical, it was too late - Brooklyn didn't let up.

Blake Griffin struggled surprisingly well against Giannis Antetokounmpo in the paint. However, that didn't stop the Greek from scoring his 34 points. As for the rest, the Bucks had no one to point to - it was a no-brainer from beyond the arc. 6-of-30 from beyond the arc - that's going to be extremely difficult to beat the Nets.

The Nets' convincing win in the first game should not be misleading. The Bucks will surely get their game under control and come into the second game more focused. In addition, the already famous Milwaukee three-point offense should work. We might recall that the Stags were down in game one of the series against Miami, but Budenzholzer's men pelted their opponent in the first quarter of game two. It's entirely possible that we'll see something similar this time, too. We're predicting that the Bucks will tie the series.