Content
To top
1.
Bulls can get it together, Magic heading to the lottery
2.
Expert Betting Tips
3.
Betting Odds
Users' Choice
12 200 USD 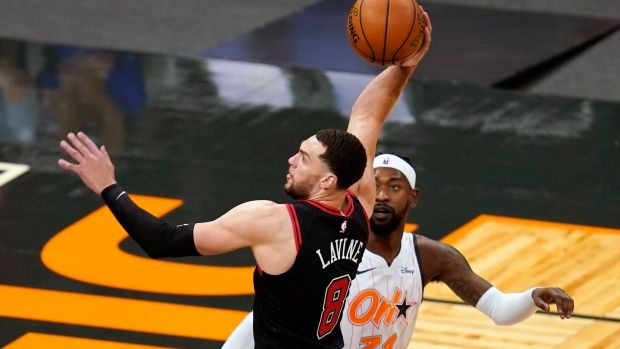 NBA betting has been a troublesome affair on many occasions. I write these pieces in advance(Algorithm-based reasons) so there are times when a key player is missing just before the game and well, it usually takes one player to change the complexion of a match-up. And well, what can we do, even known that the competing squads will be healthier during the game, it is not a guarantee that the bet is safe. Anyway, let us jump into this game between the Chicago Bulls and the Orlando Magic in the Eastern Conference tussle.

Bulls have won 31 games and have compiled 18 losses, winning three of their last four games after having a tough January. The Bulls have been playing without Lonzo Ball and Alex Caruso, two big-time Point Guards, and of course that has hurt the balance. Thankfully for the Bulls fans, their team has gotten back LaVine back after a decent length of absence and they have found some rhythm since he has been back. On the other hand, the Orlando Magic is the only team that has lost 40 games and with just 11 victories, the Magic has been struggling big-time. Surprisingly, the Magic has won three of the last four games, by far their winningest window throughout the season. Orlando is in a rebuilding mode and well with multiple rookies and youngsters in the main five, the team has been having troubles on both ends of the floor. Can the Bulls make sure that they take advantage of these perpetual struggles? For my game result and total prediction, go to “Expert Betting Tips”.

Bulls can get it together, Magic heading to the lottery

Bulls can get back their old ways

Chicago Bulls at one point had a 26 wins and 10 losses record but since LaVine and Ball were out, the team lost 75% of their games, and apart from these two, the big Forward rotation has also been running thin since the beginning of the season. Anyway, winning three of their last four games mean that they are coming back to their old winning ways and why not, they still have a strong squad. With DeRozan, LaVine, and Vucevic, you have three high-quality scorers in the main-five and Coby White can step up for big shooting nights off the bench. Meanwhile, Ayu Dosunmu has been doing a decent job at the one-guard, especially as a playmaker. Sure, there are holes in the wing depth, off-guard depth and the big-Forward depth, but the Bulls have a plethora of shot creators.

Orlando is heading for a 20-games win season and is that a surprise? Well, not really. With Anthony, you have a sophomore as the one-guard, Jalen Suggs at the two-guard is a rookie, Franz Wagner at the wing is a rookie, Wendell Carter Jr. and Mo Bamba are in the fourth season, which implies that the team is fairly young and is in full rebuild mode. Well, this number of losses and an inexperienced lineup means that the team will acquire a talented young player in the next draft. The Magic core looks solid to me especially compared to the Pistons, Rockets, and Thunder, well at least, in my opinion. Wagner has emerged as an all-around threat, Anthony is a top-notch scorer, Suggs has shown isolation scoring abilties while Bamba and Carter Jr. have a lot of room to grow.

Points Range: Magic has scored 110 or more in three games straight, by far their best stretch offensively this season. On the other hand, the Bulls have scored 111 or more in four games straight, including two straight games with 122 or more. This means that both teams have fared well offensively. On defense, the Magic has restricted teams to 108 or fewer points in three of the last four games, and well, that is why they have been able to lodge some substantial victories. On the other hand, the Chicago Bulls have given up 110 or more during most games these days and their defense has especially suffered since Ball and Caruso have been out. I must note that the Bulls are doing much better defensively at home. I believe that the Magic will score at least 103 but not as much as 110. Meanwhile, I believe the Bulls will score more than 115. I think the total points range here is 220-230.

Prediction: LaVine and DeRozan can take over the game with their offensive abilities and they are surely two of the best scorers in the league as of now with DeRozan being red-hot. And I think they will come up with a big-time performance here and I think Vucevic will get around 20 or so. On the other hand, I think Magic will start decently but perhaps will struggle in the second or third quarter. I think the Bulls will create a wide separation late in the second quarter while leading from the get-go. I see the Bulls clinching this game 119:106.