Denver vs Phoenix: Jokic doesn't give up 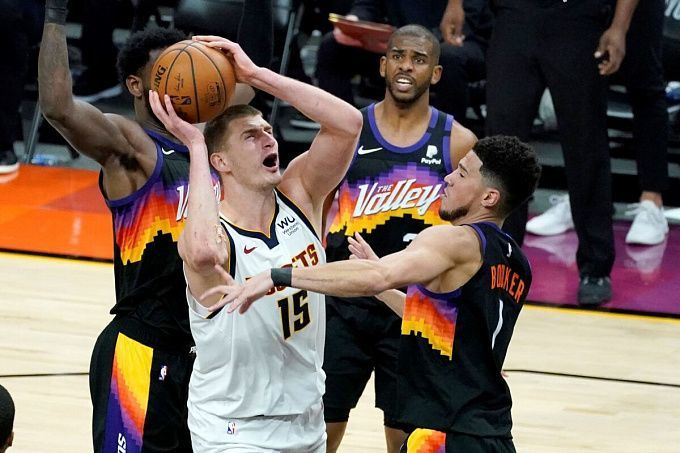 Denver is in danger of losing the series to Phoenix, and Game 4 of Round 2 will be crucial for the Nuggets. Nikola Jokic has no intention of giving up - will the newly minted MVP be able to win the upcoming game?

Nikola Jokic became the first MVP not to miss a game in the season, and that may have played havoc with him. Even Denver head coach Michael Malone has noted that the Serbian center is lacking in strength, which should come as no surprise this season. His shooting percentage from beyond the arc dropped noticeably in the series with Phoenix, though Jokic still averaged 26 points. Overall, the team's shooters haven't been up to par yet, although it was three-pointers that allowed the Nuggets to win several times in Round 1. Michael Porter has become less effective and there have been no new bright splashes from Austin Rivers and Monte Morris. All in all, Denver's biggest star simply has no one to help. The good news is the return of Will Barton, who is averaging 12 points in 2 games in the current playoffs. P.J. Dozier may be back soon, but Jamal Murray is out for the rest of the season.

The Suns are slowly picking up after a tough 1st round against the Lakers, which isn't surprising. Chris Paul was far from optimal in last week's series, but he's slowly healing from his shoulder injury and starting to carry the team at the right moments. Phoenix continues to be one of the best defensive teams in the league, and Deandre Ayton has improved noticeably. The Bahamian center was previously seen as the weak link on defense but now he's doing a great job guarding Jokic. On the outside line, Ayton has been very aggressive and his rebounding has been a big help on offense. Devin Booker should also be noted: He's averaging 27.2 points these playoffs, hitting 49.4 percent from the field and 39.6 percent from the three-point range.

As for team statistics, Monty Williams' team is 2nd in assists this postseason and 4th in shots on goal. Also worth noting is the low number of losses, with only Milwaukee committing fewer fouls than Phoenix. The Suns currently have no problems with their lineup: only Abdel Nader is sidelined.

The first game of the series was very tight, and Denver had a good chance to win. This season, Phoenix hasn't been a rare defensive slump at the arc, and the Nuggets could very well fly right now. Nikola Jokic is still good, though he could also add to his effectiveness. Everything will depend on Denver's role players, as well as Michael Porter, who can score difficult shots. I suggest betting on the following outcomes: