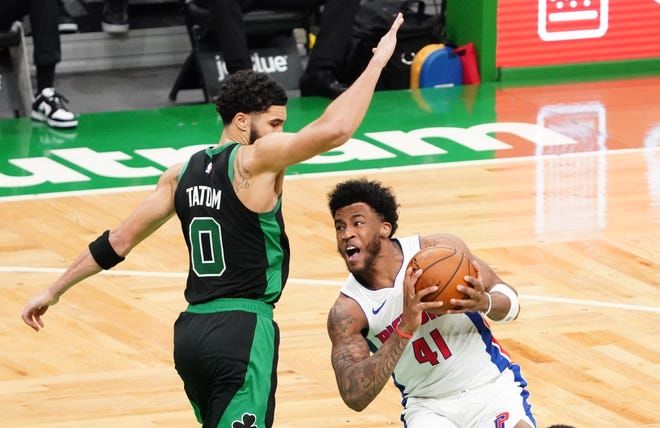 NBA betting has been a tricky affair but hey, there are some obvious ones that always click, isn’t it? Well, presenting the overview of multiple games and covering these games on a daily basis is a privilege in itself. There are teams that rise up during this mid-season window while there are teams that hit a cold streak in this crucial window. Why is it crucial? Well, because it also means that the trade deadline is near and it means that the teams can be looking for some names to change the complexion of the season or look to unload contracts or pick some fresh picks to acquire young talent. There are also players who look for a change of scenery and thus, it is not just the teams but also players that seek trades. Anyway, keeping all of this in mind, let us jump into the game between the Detroit Pistons and the Boston Celtics.

The Pistons have been among the bottom teams in the league throughout the season and their season is a mirror to the 2020-21 season. They have lodged just 12 wins in the 51 total games, and their 39 losses indicate a perpetual struggle. They have lost six of their last seven games, a type of window that we are accustomed to when it comes to the Pistons. Anyway, this is the cost of rebuilding and this is how most critics and fans predicted the Pistons season.

On the other hand, the Boston Celtics are certainly not in a rebuilding mode but yes, they have underachieved considering the talent they have on paper. They have 28 wins and 25 losses this season so far but have played on a high-clip recently, winning three in a row and five out of the last six games. The Celtics play against Pistons and then Magic so this is a great opportunity for them to get things ticking. Can they notch these games? To know my game total and result prediction, jump to “Expert Betting Tips”.

Crucial phase for Boston, Pistons can be busy during trade deadline

As stated above, the Celtics have won three in a row and are going through a hot phase right now. However, the Celtics have been unable to go on long winning streaks and have many times followed these streaks with a cold spell. They have not won four in a row so far this season and that is one of the big reasons why they have not compiled a 60% win record. However, this is a huge chance for them to get on a five-game winning streak at least, their next two games are against two of the worst teams in the league. And this sort of opportunity is the one that they should capture now to make sure they finish in the top-six and forget the hassle of Play-in tournaments. Can the Celtics propel themselves to 46-48 win season from here?

Celtics put a more than a decent emphasis on the defensive end and they have been among the better defensive squads this season, and that is one of the reasons why they have a +50% win record. The team has terrific one-on-one defenders in Smart, Brown, Tatum, Horford, Williams, and Schroeder. Meanwhile, on the offensive end, the team has Tatum and Brown who have been working well as a duo better than earlier in the season, scoring at a high clip. Smart helps with the ball-handling duties and can score and act as a playmaker at a decent clip. Schroeder has struggled shooting-wise but Josh Richardson has picked up the slack along with Grant Williams off the bench. Al Horford and Robert Williams III form a physical duo at the Center spot, and yes, the Celtics certainly have a solid core and the potential to become an elite squad with their arsenal.

Detroit can be an active player during the trade deadline

Pistons are a rebuilding team and it is clear that making the Playoffs has not been on their agenda for two seasons now. With young teams who have players still figuring out the NBA system, a less than 25% win record has to be usually expected. The team can struggle on both ends of the floor, has huge problems with shot selection, and gets massively outplayed game in and game out. So, perhaps, the next season will be like this one as the team stacks up youngsters who are yet to crack the NBA code.

Jerami Grant has been the leading scorer for the team and also their best defensive player at the wing. He can be traded soon to a contending team and in exchange, the team can ask for some high draft picks as his trade value is incredibly high. Players like Cory Joseph, Trey Lyles, Hamidou Diallo, and Kelly Olynyk can also bring decent returns, in a trade package along with Grant. I think the team will stick to the young core of Cade Cunningham, Saddiq Bey, Isaiah Stewart, and Killian Hayes but yes Hayes especially needs to work on his shot selection and offensive arsenal while Bey can be a more effective shooter if he is surrounded by better perimeter shooters. I think the Pistons will surely look to stack up young talent around the trade deadline.

Assuming they are healthy, I expect the following stats from the players here:

Points Range: The Celtics have scored 113 or more in four of the last six games and well, they do play at a slower pace than more than 20 teams in the league. Detroit Pistons have scored 111 or more in two of the last three games but I doubt that the Celtics defense will give them that much luxury. The Celtics defense has usually limited teams under 109 points mark and even a high-scoring Charlotte team could score 107. I believe the Celtics will stall the Pistons here below 108. I think the Celtics will cross the 114 points mark here. The Total Points Range here seems to be 220-230.

Prediction: The Pistons lost the last night and they will play a comparatively freshers Celtics team here. Record-wise, trend-wise, and in almost all aspects, the Celtics have an edge over the Pistons here. I see the Celtics bench enjoying a lot of success here along with the starters. I believe the Celtics will win this 119:102.