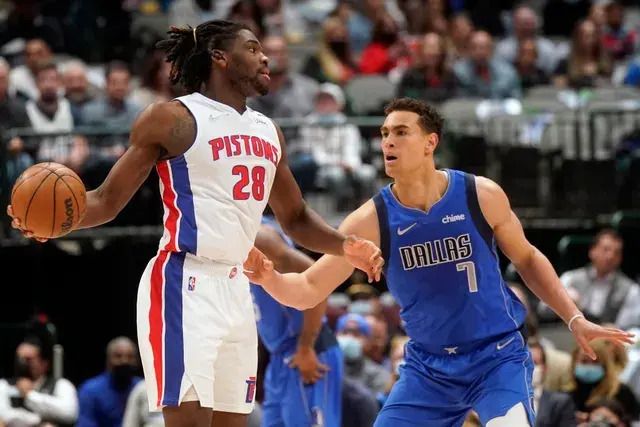 Hey people! How is it going! The NBA Regular Season will soon kiss us goodbye and we will be heading to the Playoffs soon. But even with barely five days of action remaining in the Regular season, there is a lot to play for! And, the Dallas Mavericks will surely look to finish the season on a high and they will be a huge chance of nabbing a win as they meet the Detroit Pistons.

Although this was not among the most efficient seasons for the Detroit Pistons, the second half of the season was much better for the team. First, the team saw the play of Cade Cunningham improving at a rapid rate and the rookie surely turned it around. Marvin Bagley III was a terrific acquisition in the mid-season trade and his ability to finish close helped the team become better. Saddiq Bey will need to improve his efficiency but promises to be an effective wing shooter. The future of Jerami Grant is hazy with the team but he is worth keeping because he brings value on both ends of the floor. Killian Hayes showed that he can be a top-notch perimeter defender while Isaiah Stewart continued to have a strong presence as the Center. How will the Pistons approach the offseason?

The Mavericks are brilliant

The Warriors have just edged out the Mavs for the third spot and the most likely finish for the Mavs seem to be the fourth spot at this point. One thing is for sure, they will either play the Jazz or the Nuggets in the First Round and no matter who they match-up against, they will pose a great threat. Luka Doncic has been one of the best closers in the game and surely deserves a lot of plaudits and has built a strong case for the MVP award, leading a team without any other star to the ascension. The defense of the Mavericks is one of the best in the league with the frontline of Maxi Kleber, Dorian Finney-Smith, Reggie Bullock, and Dwight Powell. A lot may hinge upon how Jalen Brunson and Spencer Dinwiddie play during the Postseason but one thing is for sure, the elite defense of the Mavs will cause troubles.

Points Range: With Marvin Bagley sidelined, the Pistons can face some trouble finishing against the imposing and athletic frontline of the Mavericks. One other trouble they have had is the three-point shooting and with the lack of high-yielding three-point shooters, I find it difficult to see from where the Pistons can sustain an offense that can even shoot better than 42% or so. On the other hand, Luka Doncic can deal with any type of defense and his all-around skills can prove to be too much for the hosts. Spencer Dinwiddie and Jalen Brunson provide great depth while the frontline has been playing much more motivated on the offensive end. The Mavericks are a better squad on both ends than the Pistons on average. I don’t see a high-scorer here and the total points range can be 210-220.

Prediction: The difference between the two sides is immense but we have often seen some bottom-ranked teams pull off some upsets at this point in the season. However, with the absence of Grant and Bagley III, the frontline of the Pistons will be highly compromised and they look outmatched almost in all departments. The Pistons won three in a row but the last two wins came against below 40% win teams. That is why I believe the Mavericks will come up with a humungous 118:100 win here.