Milwaukee Bucks vs Chicago Bulls: reigning champion likely to give up 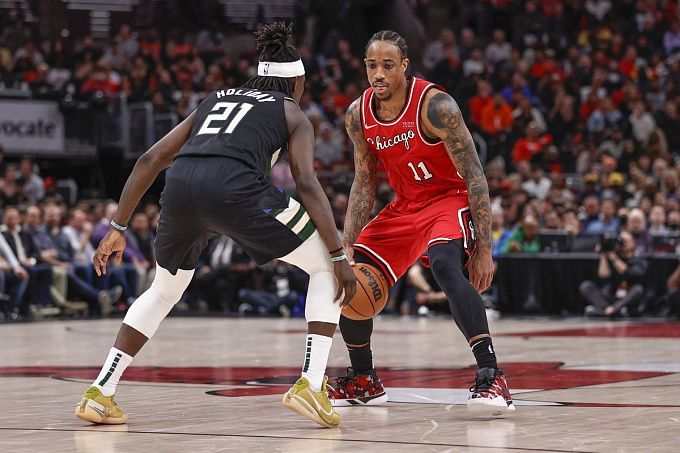 The first game between Milwaukee and Chicago was the most boring of the current playoffs: the teams could not even get past the 180-point mark. Bookmakers are now expecting a higher score. Will the Bucks and Bulls reach the announced total?

The Bucks finished 3rd in the East at the end of the regular season, behind Boston on extra points and two wins behind the leader. Giannis Antetokounmpo is the club's undisputed leader, and he has even added a little in some aspects this season. "Greek Freak" has gotten better at throwing free throws and hitting from mid-range, although his long rituals at the line became a meme of sorts last playoffs. Khris Middleton was 2nd best in Milwaukee, but Jrue Holiday played more efficiently on offense, making more than 50% of his shots from the field. Brook Lopez has picked up some nice form since his injury, and now he's getting a full 30 minutes of playing time for a starter. There are a total of 9 players on the Bucks' bench, including Bobby Portis, Jevon Carter, Pat Connaughton, Grayson Allen and Wesley Matthews in addition to Giannis, Middleton, Lopez and Holiday. George Hill and DeAndre' Bembry are out, and Jordan Nwora is questionable again.

Milwaukee has four wins in the last five games. In the 1st game against Chicago, Mike Budenholzer's players proved stronger, 93-86. From the very beginning of the game the Bucks seized the initiative, but towards the end of the third quarter the team lost their handicap and even let their opponent take the lead. Milwaukee made only 10 of their 38 three-pointers (26.3%) and only Portis, Carter and Matthews could boast a more or less respectable shooting percentage with a combined 5 three-pointers made. Giannis was the most productive player for Milwaukee with 27 points under his belt.

The Bulls had a poor second half of the season, but anyhow, making the playoffs for the first time in 5 years can be considered a clear success for Chicago. In addition to DeMar DeRozan, Zach LaVine and Nikola Vucevic, it would be nice to have a quality bench, and right now losing Lonzo Ball for the rest of the season has been nearly catastrophic. Ball is one of the Bulls' best defensive players along with Alex Caruso, and the team could certainly use some of Lonzo's three-pointers. Chicago has another scorer, Matt Thomas, in the infirmary, and the best available reserves are Coby White and Patrick Williams, who have no playoff experience.

Chicago looked decent against the reighnin champions, but execution sagged badly. Billy Donovan's squad frequently missed shots on "their" possessions: DeRozan, for example, frequently missed mid-range shots from good positions. It's clear that the Bulls' offensive potential is still high and that LaVine is capable of achieving more. Vucevic and DeRozan combined for just 15 of 52 shot attempts, while LaVine made 6 of 19. On the positive side, Milwaukee posted a respectable defense and won the opponent's turnover battle: The Bulls made 10 steals and grabbed 16 offensive rebounds.

Milwaukee have defeated Chicago 9 times in their last 10 head-to-head games. The Bucks were stronger four times in the regular season, and won on the road 106-127 the game before last. The lineups were much the same: only Lonzo Ball and DeAndre' Bembry didn't play.

Milwaukee have not shown anything outstanding on defense, and compared to the last playoffs, they have gotten even weaker. The Bucks don't have a defensive backup of P.J. Tucker's level, and the coach isn't taking the risk of throwing Serge Ibaka into the fight. Chicago will have a chance to prove themselves, they just need to hit their shots. 86 points on 96 possessions in the last game is an awful performance, but both LaVine and DeRozan have yet to show what they got. I suggest we bet on the following outcomes: