Milwaukee Bucks vs Philadelphia 76ers: The battle of two contenders in the East! 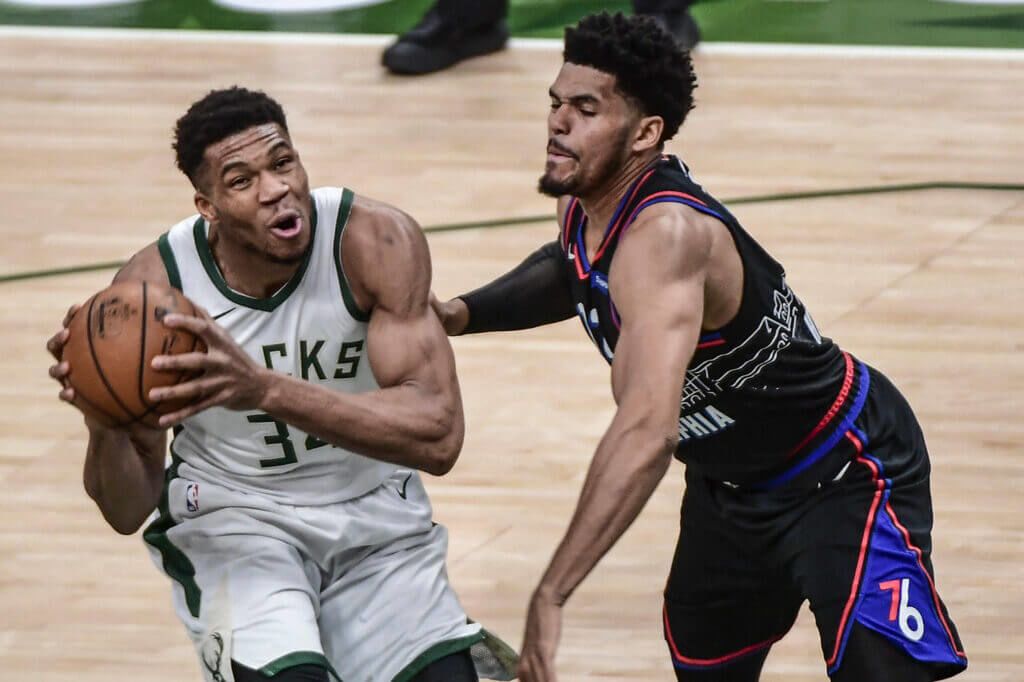 The whirlwind of the NBA has been heading towards the All-Star Break and the Break will bring much-needed rest for many players. And as we touch the Break, we will also see festivities like the Three-Point Contest, Slam Dunk Contest, All-Star Game, etc. However, the more exciting part of the equation for me is the Postseason which is not far away at this point, what a journey it has been! Innit! So, yes, as we look at different teams night in and night out, we can’t underplay the importance of the Play-in tournament and the spots up for grabs as the race only becomes more intense. Keeping that in mind, let us dive into the match-up between the Milwaukee Bucks and the Philadelphia 76ers.

The Bucks have notched 36 wins and 23 losses, third in the Eastern Conference at the time of writing. While they remain in contention for the top spot in the Conference, they are not the only squad that can be a force down the line. There are various teams still in play for the prime spot and as the defending champions, the Bucks will like to enter into the Playoffs with the home-court advantage for most parts. See, the East has blossomed this season and the Bucks can face numerous challenges this time around. But they have an ace like Antetokounmpo who knows when to heat it up.

Talking about heating it up, the Philadelphia 76ers have received immense contributions from Joel Embiid. Embiid has been going through an MVP-like production and continues to dominate opposing Centers on a regular basis. The team did acquire James Harden but he will play for the squad past the All-Star Break. The 76ers have lodged 34 wins and 23 losses but one alarming fact is that their bench hasn’t been clicking at all and with much deeper teams in the East, Embiid’s presence alone can’t be enough so yes, the team certainly need James Harden to play at a high keel. But before he returns, can they stall the Bucks away from home? To know my game total and result prediction, slide to “Expert Betting Tips”. For my player-based prediction, hop to “Player Performance Prediction”.

Bucks are formidable but they need much more

While the Bucks’ record is certainly nothing alarming, the East has risen this season. Bulls, Heat, Celtics, Raptors, and the Sixers all look boosted and the Bucks’ road can be a little more tenuous than the last season. The team is overly reliant on Antetkounmpo and whenever he has missed games, the Bucks have fallen apart. While it is true that the trio of Middleton, Antetokounmpo, and Holiday, provides great balance, the rest of the unit has some issues apart from Portis. The bench looks highly fragile, and there are times when the team has given away an advantage while going up against the second units of other teams. Can the Bucks find more depth to defend their title?

With the trade of Curry, Drummond, and Simmons, the team has lost two key pieces in Curry and Drummond to bring in Harden. Drummond gave quality minutes off the bench and the 76ers’ bench hasn’t been consistent except Georges Niang, who has been hitting key jumpers, however, he is not someone who can drive the bench by himself. Embiid has gone on about his business while Harris and Maxey have provided terrific support but the play of reserves like Furkan Korkmaz and Shake Milton has left a lot to be desired. Once James Harden steps up on the floor, the team will get an all-around talent but, still, they will need from the bench. How will the duo of Harden and Embiid mesh? To be honest, it can work considering Embiid can play quite a bit off the ball. But what about Maxey? Will his game be impacted?

Of course, Giannis Antetokounmpo is a handful and while Embiid and Harris form a sturdy frontline defense, Antetokounmpo can still charge in and pour in buckets after buckets. The two teams are evenly matched considering how their benches are thinned-down but the Bucks have four major options on offense with Giannis, Middleton, Holiday, and Portis. The 76ers will need a big night from Embiid here to counter the threat of Giannis. In terms of shooting, the Bucks have had some off nights from the perimeter while the Sixers also lack shot-creators. If Bucks have to extend their advantage, Portis will have to fight through and have one of his special nights.

Points Range: The Bucks have scored 120 or more on a regular basis but the 76ers defense doesn’t allow these many. However, the Celtics put up 130+ in the last game against them, but that has been not a regular case. On the other hand, the 76ers have been struggling to score around 110 these days but the Bucks style of play can give them an opportunity to do so. I believe the Bucks will rack up around 115 here while the 76ers will score around 110. The total points range can be 220-230.

Prediction: The Bucks will be a challenging foe at home and the 76ers will need a lot out from Harris and Maxey here. I think the frontline of Middleton, Antetokounmpo, and Portis will come firing off the gates and the team will shut the gate around the third quarter. I see the Bucks taking this game 119:110.