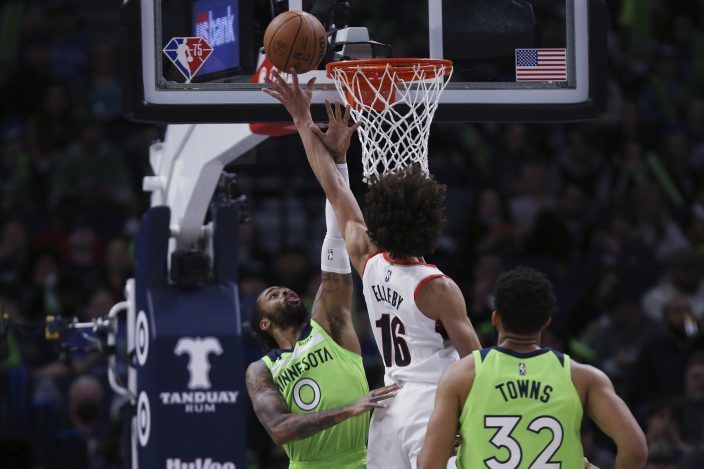 As NBA moves into the testy waters of the Playoffs, the landscape has become intense. It is a desperate time for the squads who are looking to slate in a higher ranking or sneak into the Play-in tournament because the window to make comebacks and pull off winning streaks keeps shortening. This is why squads have to be wary of collapsing timeline because unless some of the bottom feeders pull off a big winning streak, things will keep reaching out of hand. And to add to the canons of the NBA, the Portland Trail Blazers meet the Minnesota Timberwolves.

The Timberwolves have won four in a row but injuries are now surrounding them and as things get deeper this season, the race to the top-six is only going to become tougher. However, the Timberwolves are with 36 wins and 29 losses, currently in the seventh spot but the teams above them in Nuggets and Mavericks look primed to be among the top six teams. On the other hand, the Trail Blazers have played hurt for a large section and they have lost four in a row after they had won four in a row. They have registered 25 wins and 38 losses but with Nurkic out, their middle position has been hurt in various areas. Remember, their leading scorer and assists maker in Damian Lillard hasn’t played for around two months now but young Anfernee Simons continues to sizzle with his play. The Timberwolves did beat the Trail Blazers in the last game, will they do it again? To know my game total and result prediction, go to “Expert Betting Tips”. For my player-based props prediction, jump to “Player Props Prediction”.

The Minnesota Timberwolves have done a great job of nabbing wins this season but despite that, their chances to be in the top-six are still slim considering the form of Nuggets and Mavericks. On the other hand, the Trail Blazers were holding on to the tenth spot with Jusuf Nurkic in the middle but since he has been absent, their team balance is in tatters. The Trail Blazers are not likely to make it to the Play-in tournament, especially with Damian Lillard gone for the long-term. The team has also been playing without Nurkic, who leads them in rebounding while without Winslow and Bledsoe, there is just nowhere to go for Portland in multiple areas. All in all, the Timberwolves are most likely going to end up at the seventh spot while I believe the Trail Blazers will be losing a lot more. The upcoming schedule for the Timberwolves also look easier with the next three games against struggling teams.

Both teams are hurt but the Trail Blazers are just highly depleted in this game, they will be without only reliable Point Guard option in Simmons. However, if Josh Hart is available, they may get some semblance. While the Timberwolves are likely going to be without Anthony Edwards and Patrick Beverley, Naz Reid, and Taurean Prince are also questionable for the game, the team still looks strong with Anthony-Towns, D’Angelo Russell, Vanderbilt, McDaniels, Beasley, and McLaughlin. To be honest, the Trail Blazers look highly outmatched here and it will be a surprise if they are able to pull off something special here even if Watford, Brandon Williams, and Drew Eubanks doing a decent job. Not having SImons does hurt them.

If these players are available, these are my player-performance predictions:

Points Range: The last game between the two teams yielded 256 points and the Timberwolves-based games usually go in the 235+ points range. On the other hand, the Trail Blazers’ defense has been highly ineffective these days and that is due to the lack of their regular rotation players. On the other hand, the Timberwolves engage in the shootout types of games and they keep on piling on points and it can highly likely be the case here. The total points range seems to be 230-240 points.

Prediction: The Trail Blazers offense is going to suffer without Simons and with D’Angelo Russell, the Timberwolves can surely eke out the advantage at the Point Guard position. Karl Anthony-Towns combined with a strong offensive frontline and isolation threats like Beasley and Nowell surely give the Minnesota squad an edge. If Josh Hart plays, he can be an all-around threat but I fail to see how Portland will counter the depth of the Trail Blazers. I believe the Timberwolves will win 130:105 here.