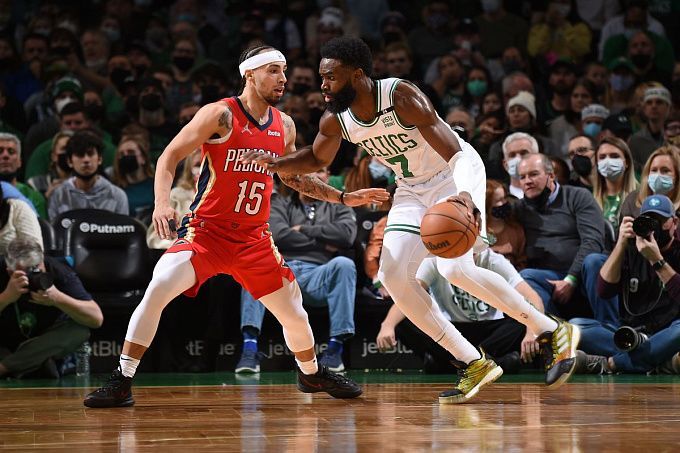 Boston has beaten New Orleans on the road only once in the last six years, and the Celtics have not been very good this season. Can the Celtics improve their head-to-head stats against the Pelicans?

The Pelicans are three wins behind the play-in zone and are in 12th place in the Western Conference. There is still a long way to go, but not letting the competition get too far away will be difficult due to injuries to Brandon Ingram, Jonas Valančiūnas and Zion Williamson. For Zion, the season has yet to begin, and it's unclear when the star forward will return. Kira Lewis Jr is also on the sideline, which rookie José Alvarado is replacing. Nevertheless, the Pelicans had two wins in their last four games, with the New York Knicks being among the defeated. New Orleans is trying to compensate for the lack of leaders with combination play and ball movement, with Willy Hernangomez starting at the centre. He's coming off the bench and putting up big offensive performances in some games.

In the recent game against Denver, however, Pelicans players were not very efficient on offence, and as a result, the team lost - 105:116. This time, Juan Hernangomez made only 5 of his 14 shots, while Devonte Graham and Nickeil Alexander-Walker underperformed on the boards. Willie Green's team made only five three-pointers, and nobody in New Orleans shot better than 25 per cent from beyond the arc. Herbert Jones made only 1 of his five field-goal attempts but made up for it with his quality passing game. He scored 19 points on 7-of-13 shooting.

It won't be easy for the Celtics to rise above their current 8th place finish in the Eastern Conference, and by the trade deadline, the club's office needs to step up to strengthen for the rest of the regular season. It would seem that the club has everything it needs to make a splash: young stars (Jaylen Brown and Jayson Tatum), defensive role players (Marcus Smart, Al Horford, Robert Williams), and promising youngsters (Romeo Langford and Grant Williams). Boston could use a decent playmaker, but Dennis Schroder isn't as good as he might be. The Celtics rank 22nd in the NBA in the assists-to-loss ratio, and there may be a reason why some players criticized Brown and Tatum for not sharing the ball. The good news is that at least all of the starters are back and only P.J. Dozier and Bol Manute Bol, who recently joined the team already injured, are in the infirmary.

In their last three regular-season games, Ime Udoka's team lost on the road to Atlanta, 92-108. This time, Tatum wasn't playing well, and Jaylen Brown wasn't at his best either: 9 of his 22 field-goal attempts were successful. Almost all of the Celtics' three-pointers missed, and the Celtics only managed seven long-range shots in total. In addition, the opponent defended well, and Boston lost the ball much more often.

A lot in the upcoming game will depend on whether Ingram and Valančiūnas join. It's quite possible that the doctors decided to save the players in the back-to-back. Another thing is that even with a more or less optimal squad, New Orleans recently failed to beat Boston. The Celtics are much better defensively, and compared to last week's meeting, Smart and Williams will also be back. If at least one player from the Brown-Tatum duo is effective, the visitors' chances of success will increase significantly.