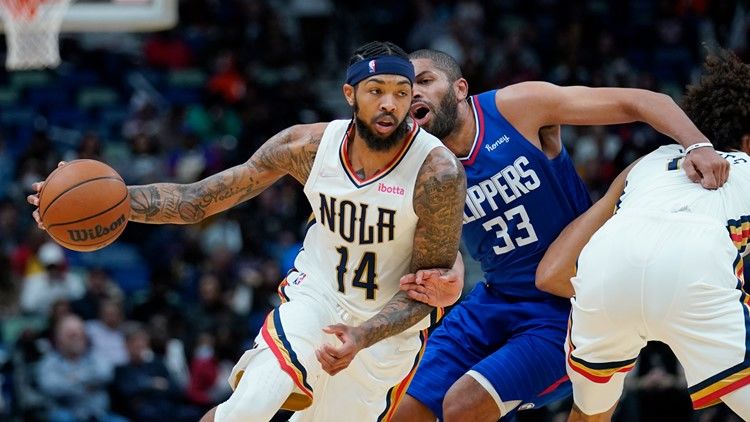 The mid-way point of the season has arrived and what a cracker of a season we have had despite the looming COVID-19 threat. The storylines about rising teams, falling stocks, and a trade market that will become volatile soon are going to dominate the mid-season period as has been the case for many years now. And the two teams who will play here can be active players too. Anyway, here the New Orleans Pelicans will host the Los Angeles Clippers in a Western Conference affair. The Pelicans have struggled all season long and have compiled 15 wins and 26 losses while the Clippers are at a 50% win mark with 21 losses and wins each. For the Pelicans, their superstar Zion Williamson has not played this season yet and Lord knows when the youngster will return. On the other hand, the Clippers are also playing without their major duo of Paul George and Kawhi Leonard. The Pelicans won their last contest against Timberwolves during the dying moments of the game while the Clippers have won two in a row including one against the reigning MVP Nikola Jokic-led Denver Nuggets after erasing a 25-point deficit. These two teams have shown fight all season long but who will come on top in this exciting affair. For my result and total prediction, go to “Expert Betting Tips”.

Clippers have done well: At one point, it felt like that the Clippers might go on a 7-8 game losing streak if we take into account how many pieces they are missing. Still, the veteran unit has done well in eking out wins here and there while some youngsters have also responded to the call. Marcus Morris has been a key with his 20+ points production while Amir Coffey has scored 18 or more twice in a row and the Clippers have won two in a row with him as the starter. Reggie Jackson needs to fix his shooting percentage while the team needs to find more minutes for Eric Bledsoe, who can act as the primary playmaker(something they need badly).

Terance Mann has the potential to score more but a 10-15 points production is handy, meanwhile, Batum, Zubac, and Ibaka can fill in well, at least on the defensive and rebounding end if anything. The Clippers have struggled to find offensive rhythm with their limited options but if someone like Mann can just add 4-5 points to the current points range then it can make a huge difference. I find the Bledsoe-Jackson-Mann-Morris-Ibaka combination effective(if deployed) because you get scoring, playmaking, and defense from this squad but yes, Clippers coach Tyronn Lue has done well in my opinion.

Pelicans need more from bench: New Orleans runs a ton of offensive sets through Brandon Ingram, who has scored even 25 or more in many games this season. Brandon is a terrific shooter, diver to the rim, and also a more than handy playmaker. He has Devonte Graham with him who performs and produces almost similar numbers to Monte Morris of the Denver Nuggets, stretching the floor through his shooting. Josh Hart has shown all-around abilities and his scoring range keeps on improving while the biggest shining light has been rookie Herbert Jones with an improved offense each month. Meanwhile, Jonas Valanciunas helps in acquiring rebounds and is often the second option on offense to Ingram.

The biggest shortcoming for the team has been its bench. While Nickeill Alexander-Wlaker has been decent in terms of scoring around 10 or so, Garrett Temple as the defensive wing should produce a little more. Meanwhile, the rest of the bench players are not regulars but I see a lot of potential in Jaxson Hayes. I think if the bench were more formidable, Pels could have easily won 3-4 games more. Defensive discipline and a lack of bench strength have been two weak points of the Pelicans this season and of course a lot of that has to do with the disturbance of balance in the absence of Zion.

Points Range: Ah, isn’t this a fun discussion! Yes, well, for the Clippers, producing offense has been trickier than the Pelicans and it boils down to multiple players being inefficient and simply a lack of versatile scoring options. The team has still managed to score 104 or more in three of the last five matches but has scored below 90 in the rest of the two. For me, usually, you can expect points in the 100-106 range from the Clippers but an under 100 performance doesn’t bring much surprise. On the other hand, the Pelicans have fared much better. They have scored 110 or more in half of the last eight games, while scoring usually in the 104-112 range since mid-December or so. On the defensive end, the Clippers have fetched mixed results and have allowed 120 or more in two of the last five games and yes, in this sphere, the Pelicans are also similar to Clippers on most nights. On average, I think the Clippers have been just slightly better on the defensive end but hey, it is the NBA, match-ups play such a decisive role at the end of the day. I think the Pelicans will go past 100 here while the Clippers also will hover around the same mark. Overall, for me the points range is 200-210.

Prediction: Erasing a 25% deficit would certainly have boosted the morale of the Clippers against a feisty Nuggets team and with their veteran unit, they can’t be taken lightly at all. Still, the Pelicans have the good ol’ home court advantage and also come into this one after a late-game win. This is an exciting contest and I don’t care what records team have, as a writer, for me, every game brings a fresh set of analytics and this game has its own interesting dynamics. I’d lean towards the Pelicans here because, first, they are playing at home. Second, I think Ingram is in one of those hot periods and will have a chance at 25+ points again. That’s why I’d pick Pelicans to nab this 108:100.