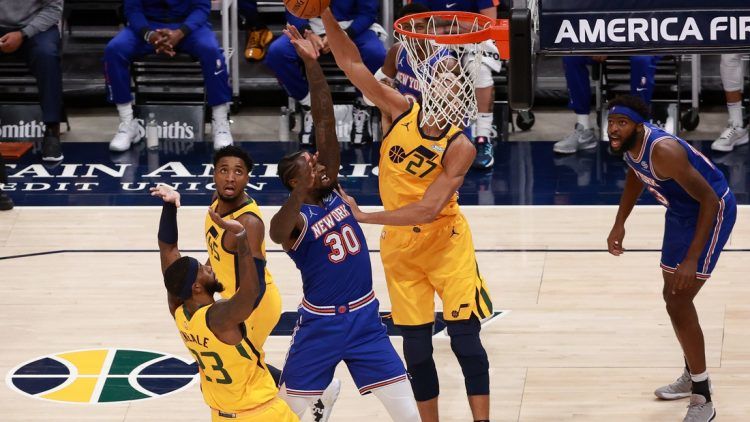 Hey, NBA fans! How has the current betting window treated you! It has been a tough couple of days for me as a predictor because hey, how would you see a Trae Young-less Hawks beating the fully loaded Grizzlies! And then there are those teams that have a similar record and are going through the same trajectory that makes for difficult prediction. Trust me, the NBA betting scenario ain’t easy and you always have a bunch of upsets, a point here and there can change the complexion. So, keeping that in our mind, let us jump to the game between the New York Knicks and the Utah Jazz.

The Knicks have won just 30 games and have ended up losing 40 games, a record that displays a huge amount of struggle. While that kind of record has helped the Lakers and Pelicans stay in the Play-in spots when it comes to the West, the East’s race has been more intense especially from the second to the tenth position. The Knicks are ten games below the 50% win mark while both the Hawks and the Hornets are a 50% win team. This means that the team will need to win each game from this point on and even then there is no guarantee of making the Play-in tournament. Co-incidentally, after this game, the squad will take on the Hawks and the Hornets, but in the overall picture, the team looks unlikely to crack the Play-in tournament code. The Knicks have won five out of their last seven games but this winning run has come after the team had lost around 75% of their games in a month’s window.

Jazz’s ambitions are higher than the Knicks

There is a sense that this season is a litmus test for the duo of Mitchell and Gobert after the Jazz failed to make it past the second round in the last season. This season, the team’s winning percentage has fallen and they have been a bit weakened on both ends of the floor. However, when a team wins 63% of the games, it does mean that the squad is in play for title contention. There is no doubt that anything less than a Western Finals or at least a seven-game second-round series in the West can be considered disappointing because the expectations have been high from this well-balanced squad. The injury to Bojan Bogdanovic has hurt the wing depth lately while Mike Conley will also remain out for this fixture due to rest so yes, with these two key players out, it is a chance for the Jazz to test out the depth. The team has gone for a six-game road trip and it will be a huge window as the Mavericks and Nuggets are right behind but the Jazz has continued to hang on to the fourth spot.

Considering these players are available, below are my player-props prediction:

Points Range: The Jazz is a much better offensive squad than the Knicks but it is clear that the team’s scoring balance is going to be hurt without Bogdanovic and Conley, as it hurts both the scoring and playmaking. On the other hand, the Knicks have been one of the most inefficient teams, and almost all of their guards go into cold shooting streaks during different periods and some teams during the same game. Defensively, the Knicks are above-average with slightly more physicality than the Jazz. All in all, if Mitchell, Clarkson, Gobert, and O’Neale feature here, I still see Jazz eclipsing 106 points here. I believe the total points range in 210-220.

Prediction: The Jazz has been struggling to field a healthy squad these days but they still have a lot of weapons to take care of business against the Knicks. Utah will need a special night out of either Clarkson or Mitchell to get a big effort going. Despite the weakened unit, I believe the Jazz will give the Knicks a run for their money. I pick the Jazz to win 110:105 here.