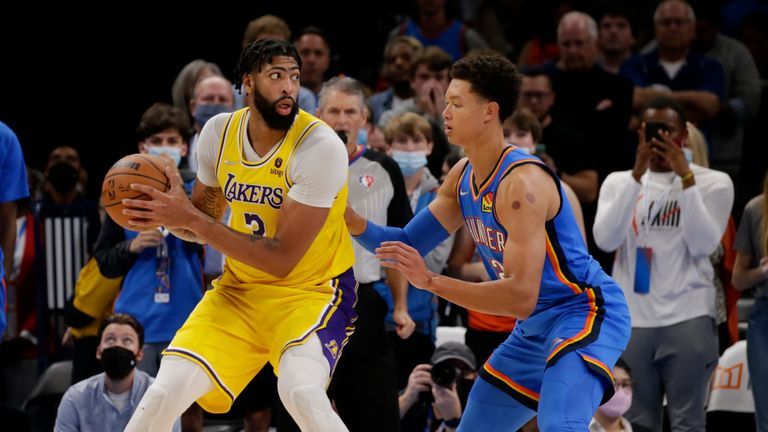 NBA betting is full of nuances and a lot has changed over the days since each team plays 82 games throughout the season. In this inter-conference affair, the Oklahoma City Thunder host the Los Angeles Lakers. Thunder has twice more losses than wins while Lakers have lost half of its games. Thunder has beaten the Lakers twice before, can the LA team avenge the earlier losses? For a quick look, simply head over to “Notes”.

Lakers instability: Imagine not even deciding upon your starters after 26 games into the season. That is what Lakers have done, first they started Deandre Jordan at Center, then Anthony Davis shuffled from big Forward to Center and now Dwight Howard is starting. Avery Bradley and Talen Horton-Tucker have been both starting and coming off the bench in exchange for each other and it seems like coach Frank Vogel is yet to find a workable combination. The team chemistry on the court has looked a little lackadaisical and the Lakers need some magic now because frankly, they are disappointing quite a lot of people.

Young Thunder: Oklahoma suffered a 73 points defeat a couple of games ago but that is understandable, the team was missing their leading scorer Shai Gilgeous-Alexander and some other key players too. For a team that virtually has no bench production for large stretches and for a team that is in total rebuild mode, seasons like these are painful. Still the team has somehow managed to score 110 or more in the last two games and has won two games in a row, yet, don’t expect much from this young and wayward team.

Lakers and defense have had a divorce, they are nowhere close, it is certain that Lakers are not a dependable defensive unit. The team gives up too many points in a single quarter and before they play a better brand of defensive ball, well, it is too late. Los Angeles has given up 110-125 points regularly and it has not been able to contain even teams who field a so-so offensive unit. Defense is this team’s Achilles heel for sure.

Meanwhile, the Thunder has on average been a better team than Lakers on defense, which has to be a surprise for sure. Yes, the Grizzlies scored 152 against them, but Oklahoma City has kept teams in the 90-103 range too. If their offense were any better, the Oklahoma City players would have nabbed many more games. One of the reasons for their decent defense is the presence of athletic players.

Offense has been Lakers strong suit even if they scored just 95 against a revved up Memphis defense. The Lakers can put up 110-120 points on a regular basis and well, when you have three all-around scorers like LeBron, Davis, and Westbrook, you are bound to score this much. On the other hand, the Thunder has had major struggles scoring the ball, they have been restricted to under 105 quite a lot so with a thin bench, Oklahoma can be blown out during many games.

Points Range: Yes, the Thunder has struggled to put up points but well, Lakers can allow a flurry of points so perhaps, the team can continue its two game 110 points or so output here. However, although I will pause before I say it because the Lakers have been failing for a long time now, I think the Thunder will be held below 105 here or so. I expect the Lakers to go for 110-117 points here. The total points range here seems to be 210-222.

Prediction: Ah, the Thunder has beaten the Lakers twice this season and that must bother the Lakers. I fail to see the Lakers losing a third time against them and yes, it is risky betting for them these days. I am going for the Lakers as the winner with a scoreline of 113:102.